Media Mikes is proud to be hosting advance screenings of the new film “Sherlock Gnomes” in Miami, FL! Click below to get tickets, first come first serve! Good luck and like always leave a comment here after you’ve seen the film!

When Gnomeo and Juliet first arrive in the city with their friends and family, their biggest concern is getting their new garden ready for spring. However, they soon discover that someone is kidnapping garden gnomes all over London. When Gnomeo and Juliet return home to find that everyone in their garden is missing there’s only one gnome to call SHERLOCK GNOMES. The famous detective and sworn protector of London’s garden gnomes arrives with his sidekick Watson to investigate the case. The mystery will lead our gnomes on a rollicking adventure where they will meet all new ornaments and explore an undiscovered side of the city. 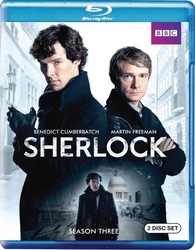 “Sherlock” has become quite the high profile show in the last year or so, most likely due to the blowing up of actor Benedict Cumberbatch. The combination of him with Martin Freeman (another phenomonal actor) is just so perfect. I know that these episodes are like little mini-movies but I would have loved to have more than just three episodes included this season. Hopefully BBC knows what it has on its hands now and before Cumberbatch gets too big, I hope they lock in another season quick.  The three episodes included are: “The Empty Hearse,” “The Sign of Three” and “His Last Vow.” If you enjoyed the first two seasons, this one builds on them and doesn’t disappoint.

Official Premise (Spoiler Alert if you haven’t seen Season 1 & 2): Two years after the devastating fallout of “The Reichenbach Fall,” Dr. John Watson has moved on with his life. New horizons, romance and a comforting domestic future beckon. But with London under threat of a huge terrorist attack, Sherlock Holmes is about to return with all the theatricality that comes so naturally. It’s what his best friend wanted more than anything, but for John Watson it might well be a case of “be careful what you wish for.” If Sherlock thinks everything will be just as he left it, though, he’s in for a very big surprise.

This Blu-ray arrives just two weeks after the conclusion of the series in the U.S. and as much as I wanted to have it immediately, I feel that BBC might have rushed a little too much to get this one out there. The episodes are only presented with an 1080i transfer. The transfers doesn’t look bad but its the point of the matter that bugs me. I know they can do better since shows like “Doctor Who” were upgraded to 1080p also. Same goes for the soundtrack, since here we only get a Dolby Digital 5.1 track. Now I’ve said this before but that isn’t Blu-ray quality for me. I was quite disappointed overall with the choices they went it.

I know that BBC hasn’t been including a Digital HD copy for shows like “Doctor Who” but they did with mini-series “Spies of Warsaw” and this show reminds me of that kind of show. I would have loved to see this available for Ultraviolet. In terms of special features, there are three featurettes included. The first is “The Fall”, which looks into this season’s events. Next up is “Fans, Villains & Speculation: The Legacy of Sherlock Holmes” looks into the popularity of the show and the character. Lastly “Shooting Sherlock” focusing on the production for this season.

Can Robert Downey Jr. do no wrong?  He is brilliant as Tony Stark and amazing as Sherlock Holmes.  The interactions between RDJ and Jude Law are just absolutely perfect.  They are made to start in these roles together.  Jared Harris is also an amazing villain and a great rival for Holmes. “Sherlock Holmes: A Game of Shadows” is not just an action film.  It is so much more.  Thought maybe not the best sequel ever, it definitely improves some on the first film and is downright really entertaining. I really enjoyed this film and I hope that Warner continues this franchise.

The Blu-ray presentation is very impressive for this release. The 1080p transfer looks really sharp and crystal clear. It also boasts an aspect ratio of 2.40:1.  The audio track is also amazing boasting a DTS-HD Master Audio 5.1.  During the film’s action scenes, my surround sound system was shaking the walls, which is totally awesome! This releases (like most WB’s releases) comes stocked with all the goods. It comes with a Blu-ray of the film, plus a DVD disc as well. Lastly there is an UltraViolet streaming digital copy included.

The special features are decent but not completely overwhelming.  There is a Maximum Movie Mode including, which is a Picture-in-Picture track hosted by Robert Downey Jr..  It is a very informative and who will honestly turn down a one-man-show of Robert Downey Jr.? There are 35 minutes of “Focus Point” included through seven featurettes, within Maximum Movie Mode. Lastly be sure to check out the free Sherlock Holmes: A Game of Shadows movie app for iPad2 or Kindle Fire. The app synchs with the Blu-ray disc to start exploring the rich and exciting history of Sherlock Holmes. http://bit.ly/JlZkvR

Synopsis: Robert Downey Jr. reprises his role as the world’s most famous detective, Sherlock Holmes, and Jude Law returns as his friend and colleague, Dr. Watson, in “Sherlock Holmes: A Game of Shadows.” Sherlock Holmes has always been the smartest man in the room…until now. There is a new criminal mastermind at large—Professor James Moriarty (Jared Harris)—and not only is he Holmes’ intellectual equal, but his capacity for evil, coupled with a complete lack of conscience, may give him an advantage over the renowned detective. Around the globe, headlines break the news: a scandal takes down an Indian cotton tycoon; a Chinese opium trader dies of an apparent overdose; bombings in Strasbourg and Vienna; the death of an American steel magnate… No one sees the connective thread between these seemingly random events—no one, that is, except the great Sherlock Holmes, who has discerned a deliberate web of death and destruction. At its center sits a singularly sinister spider: Moriarty. Holmes’ investigation into Moriarty’s plot becomes more dangerous as it leads him and Watson out of London to France, Germany and finally Switzerland. But the cunning Moriarty is always one step ahead, and moving perilously close to completing his ominous plan. If he succeeds, it will not only bring him immense wealth and power but alter the course of history.

Right now with the rebirth of the character Sherlock Holmes due to Guy Ritchie and Robert Downey Jr., the world’s top detective is back in the spotlight. This book covers the complete film and TV history of Sherlock Holmes. The book is softcover and is packed with rare archive pictures throughout and they are presented in black and white. Honestly I was aware of how much Sherlock Holmes exists in pop culture but I had no idea how in depth and how much in fact. This book really gives great insight into the most famous detective in our time.

The foreword is given from the co-creator of BBC’s “Sherlock” with Benedit Cumberbatch and Martin Freeman. It is clever and a great intro to this book. The books approach is an A-Z format listing episodes and films by title. It covers every single portrayals of Holmes, including Basil Rathbone, Jeremy Brett, Peter Cushing, John Cleese, Roger Moore, Larry Hagman and of course the latest Robert Downey Jr. In each adaption, it covers “The Mystery”, “The Investigation” and “The Solution”. It covers overall a century of depictions ranging from the silent era to the present day.

Just because you think of the classic Basil Rathbone playing Sherlock, this book also shows the other side of the role in animated shows like Batman, Scooby-Doo and the Teenage Mutant Ninja Turtles. If you are also wondering what is the new addition to this version, it is new research into the Sherlock’s silent film series. It is really interesting and especially with the new film “The Artist”, silent films are hot now and this definitely fits the appetite. Of course there is also new material for Guy Ritchie’s reboot of “Sherlock Holmes”.  If you are a fan of Sherlock Holmes than you will not want to miss this fantastic collection of every Sherlock Holmes work. 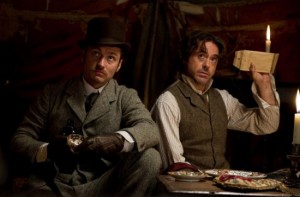 It is 1891. At his typewriter, Dr. James Watson (Law) is completing his memoirs. He has come to the chapter concerning his wedding and perhaps he and Sherlock Holmes’(Downey) greatest adventure. “It was 1878, “ he begins.

Told in director Guy Ritchie’s inimitable style, “Sherlock Holmes: A Game of Shadows” is a worthy follow up to 2009’s initial “Holmes” film. The familiar faces are back but it’s a new face that makes the film so enjoyably fun…the face of Holmes greatest adversary, Professor James Moriarty (Harris). As evil to the core as Holmes is brilliant, Moriarty has devised a way to not only begin a major military conflict but also make a fortune off of it. With the soon to be newlywed Watson contemplating the end of his work with Holmes, our private investigator instills the assistance of his older brother, Mycroft (the always dependable Stephen Fry) As Watson heads to Brighton with his new bride, Holmes gains the confidence of a gypsy woman named Simza (Noomi Rapace, who starred as the original “Girl with the Dragon Tattoo”). But is the new team clever enough to match wits with Moriarty’s genius?

The formula for a good adventure film is two-fold. First, you need likeable characters. And second, you need adventure. Both ingredients are featured here in spades. Refining the chemistry they began building in the first film, Downey and Law are more like an old married couple then professional partners. If I were to liken them to another film duo, I would call them the Riggs and Murtaugh of the 19th century. Their comfort with each other makes them seem like old friends to the audience. Fry, who hosts Great Britain’s annual BAFTA awards each year (I would love to see him do the Academy Awards) is great comic relief. In her first English language film, Rapace makes a fine debut. And as Professor Moriarty, “Mad Men” co-star Harris proves himself a most worthy addition to the Holmes canon. The visual effects are outstanding while the gadgets Holmes comes up with would rival anything “Q” could come up with for James Bond.