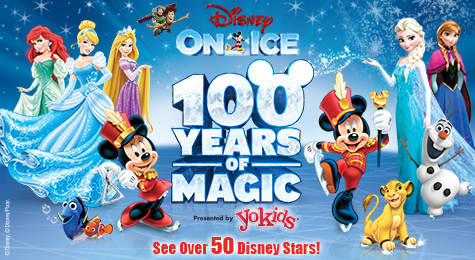 To celebrate the arrival of Disney On Ice celebrates 100 Years of Magic Presented by Stonyfield YoKids Organic Yogurt coming to the Amway Center in Orlando from September 4-6, 2015, Media Mikes would like to give our fans a chance to win a family four pack of tickets to this monumental ice skating spectacular. Please leave us a comment below or send us an email with your favorite Disney character. This giveaway will remain open until August 21st at Noon, Eastern Time. This is open to our readers in US and Canada only. One entry per person, per household. All other entries will be considered invalid. Media Mikes will randomly select winners. Winners will be alerted via email.

Audiences will be a part of the magic of Disney as Mouse-ter of Ceremonies Mickey Mouse leads a parade of more than 50 beloved characters starring Minnie Mouse, Donald Duck, Goofy and featuring an ensemble of Disney Princesses including Cinderella, Rapunzel, Ariel, Snow White and Tiana. The wintry wonderland of Disney’s Frozen also comes to life with Anna, Elsa, and the hilarious Olaf, as they discover that true love is the greatest magic of all. Exciting moments from Disney•Pixar’s Finding Nemo, Disney’s Aladdin and Beauty and the Beast will leave the whole family with memories to last a lifetime.

The legacy of Disney is displayed through 14 classic and modern stories in this epic production that features an international team of award-winning figure skaters, high-energy choreography and a breathtaking set. With over 30 melodious masterpieces such as “Let It Go!,” “You’ve Got A Friend in Me” and “Hakuna Matata,” Disney On Ice celebrates 100 Years of Magic is the ultimate Disney fan experience.

Save $5 off per ticket with code MOM5. Not valid on VIP or Rink Side seating. Hurry for the best available seats! Code expires September 3, 2015.

For a complete list of tour dates, visit the Disney On Ice website (http://www.disneyonice.com) and stay current on the latest developments through social media:

ABOUT FELD ENTERTAINMENT
Feld Entertainment is the worldwide leader in producing and presenting live touring family entertainment experiences that lift the human spirit and create indelible memories, with 30 million people in attendance at its shows each year. Feld Entertainment’s productions have appeared in more than 75 countries and on six continents to date and include Ringling Bros. and Barnum & Bailey®, Monster Jam®, Monster Energy Supercross, Nuclear Cowboyz®, AMSOIL Arenacross, Disney On Ice Presented by Stonyfield YoKids Organic Yogurt, Disney Live!

32 Replies to “Enter to Win Tickets to “Disney On Ice – 100 Years of Magic” at Amway Center in Orlando, FL”