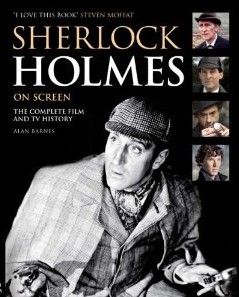 Right now with the rebirth of the character Sherlock Holmes due to Guy Ritchie and Robert Downey Jr., the world’s top detective is back in the spotlight. This book covers the complete film and TV history of Sherlock Holmes. The book is softcover and is packed with rare archive pictures throughout and they are presented in black and white. Honestly I was aware of how much Sherlock Holmes exists in pop culture but I had no idea how in depth and how much in fact. This book really gives great insight into the most famous detective in our time.

The foreword is given from the co-creator of BBC’s “Sherlock” with Benedit Cumberbatch and Martin Freeman. It is clever and a great intro to this book. The books approach is an A-Z format listing episodes and films by title. It covers every single portrayals of Holmes, including Basil Rathbone, Jeremy Brett, Peter Cushing, John Cleese, Roger Moore, Larry Hagman and of course the latest Robert Downey Jr. In each adaption, it covers “The Mystery”, “The Investigation” and “The Solution”. It covers overall a century of depictions ranging from the silent era to the present day.

Just because you think of the classic Basil Rathbone playing Sherlock, this book also shows the other side of the role in animated shows like Batman, Scooby-Doo and the Teenage Mutant Ninja Turtles. If you are also wondering what is the new addition to this version, it is new research into the Sherlock’s silent film series. It is really interesting and especially with the new film “The Artist”, silent films are hot now and this definitely fits the appetite. Of course there is also new material for Guy Ritchie’s reboot of “Sherlock Holmes”.  If you are a fan of Sherlock Holmes than you will not want to miss this fantastic collection of every Sherlock Holmes work.