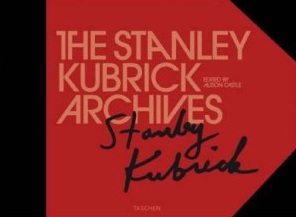 I have to start with this is probably the book I am most proud to have in my library. I have been a fan of Stanley Kubrick since I become a film buff many many years ago. My favorite film of his is “The Shining”, it is a film I can watch literally every day of the week. This book is such a tribute to Kubrick and his wonderful very unique work. I do not think that there will ever be another director that is able to replicate the magic that Kubrick was able to conjure up in his films. If this is the last book every written about Kubrick, I strongly believe that it will be enough to continue his legacy for years to come.

The book is split into two parts. The first part contains over 800 film stills scanned directly from the original prints and interpositives. I swear I cannot even count how many times, I have went through this section just starring at each image. The clarity of the images are beyond impressive and overall extremely outstanding. So if you think that is cool, then you are going to be simply blown away by the second part. This section contains about 800 items from the archives, most of which have never been published before. I am absolutely in love with this section and I was able to get a glimpse in Kubrick’s vision with images I have never seen before.

To continue with this books outstanding contents, there are all essays from Kubrick scholars Gene D. Phillips, Michel Ciment, and Rodney Hill. There are selected articles and essays, including interviews with and essays by Stanley Kubrick. They are a must ready for any true fan of Kubrick. Lastly there is all an illustrated Kubrick chronology. Every film of Kubrick’s is showcased and given the royal treatment in this, nothing is left out. If you can call a book breathtaking, that would be the perfect way to describe this.