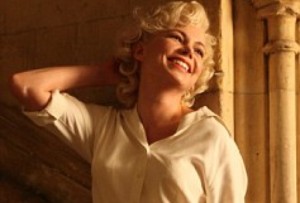 Marilyn Monroe is one of Hollywood’s greatest treasures. This is a role that Michelle Williams was born to play. Boy, was she absolutely amazing. I wish this film was double the length just so that I can keep watching her in the film. Kenneth Branagh also gives a very charged performance and is very entertaining. The Blu-ray presentation is also very impressive. The video is sharp and very crisp with its 1080p transfer. The audio is also great DTS-HD MA 5.1 track works well with the dialogue and Alexandre Desplat’s amazing score.

The film follows recent graduate and aspiring filmmaker, Colin Clark (Eddie Redmayne) who makes it his goal to get a job on Laurence Olivier’s (Kenneth Branagh) next film. Due to his persistence, he gets on the film and gets to work with the only and only Marilyn Monroe. Once Marilyn takes a liking to Colin and he becomes her latest interest.  The two embark on a week long fling that would change Colin life.

The special features are disappointing overall including only two extras. The film is an audio commentary from director Simon Curtis, with a not-so-exciting track. Then there is also a standard definition behind the scenes documentary, which runs about 20 minute called “The Untold Story of an American Icon”. It features a look into the production with the cast/crew. Lastly this release also includes a DVD copy as well as the Blu-ray. Great movie, weak extras.