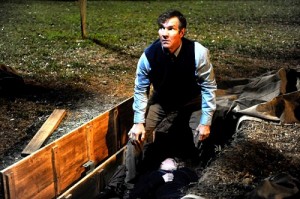 The only real draw to this film is Dennis Quaid playing one sick son-bitch. It is a role that he does not usually play and he does it really good in this film. Besides that this has nothing going for it. The suspense in the film is so tame that it comes off as non-existent. Although only run just over 90 minutes, the film drags quite a bit and its climax is a big let down as well. I would watch it if you are curious to see Quaid’s baddie turn otherwise I would avoid this film for sure.

This teen thriller follows a group of high school kids who believe that their local mortician is actually a vicious serial killer. Dennis Quaid plays Mr. Ely, the well-respected mortician.  The teens investigate his house his they believe it is haunted but they find out that the truth is much more evil than they expect. When the kids try and contact the police, they find out that no one will listen to them and side with Mr. Ely.  It is up to them to prove the truth before it is too late.

The Blu-ray presentation is ok but not great. The film is very dark and the video does an ok job of making it look decent. The sound is also decent but nothing special, especially since there was no “jump” moments, which is a major fault. The special features are also horrendous, only including one very short extra. The behind-the-scenes featurette runs just over two minutes and is a few short clips from the production. Also there is a trailer included, which gives away the whole movie.

Filed Under: DVD/Blu-Ray Reviews Tagged With: beneath, bluray, darkness, review