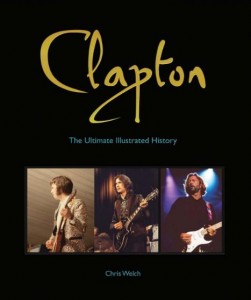 I am not sure how to start this review with except the fact that the title simply tells it all…this is the “The Ultimate Illustrated History” of Eric Clapton.  It is the perfect book for one of the greatest guitarists ever. The book covers Clapton’s five-decade-long career includes time from the Yardbirds, to Cream to the Plastic Ono Band to his solo career.  This book honestly has everything and it looks “pretty” also.  The layout of the book flows really well with mixing its amazing photos with amazing stories and information about the man himself.

The layout of the book starts with a great note from the author talking about his time that he has spent over the year with Clapton. The first chapter focuses on his childhood and his influence of the blues covering years 1945-1963.  There is coverage of Eric’s time with The Yarbirds from 1963 to 1965.   Of course there is a lot of coverage from the days of Cream from 1966-1969, as this was the real turning point in Clapton’s career.  The years 1969-1974 features quite a bit between his work the Plastic Ono Band through Derek and the Dominoes.  During 1974-1982, the book focuses on Clapton’s amazing solo career, covering everything from his hit record “Layla” to concert appearances at Nassau Coliseum in Long Island, NY.  There is still more as this book also covers 1983-present, with the Cream reunion to his work with the Crossroads Foundation.  Lastly there is a graphic discography included which only expands upon how amazing his body of work truly is.

Speaking of photos, this book is packed with over 400 rare shots, as well as images of his guitars, concert posters, and other memorabilia included.  Honestly I think you can spend hours just looking at the pictures and not even reading anything.   The author/rock journalist Chris Welch is no stranger to Clapton, since he previously authored “Cream: Eric Clapton”.  He really shows his extreme knowledge of Clapton and he does an amazing job of showing it in this book. He has also authored books about other great musicians such as Zepplin and David Bowie. Whether you think you know everything about Clapton’s amazing career or you have never heard of him, this book definitely will provide great knowledge into his life and work.  It is a must purchase for sure!