One of my “bucket list” celebs – William Kaat. He shared some great stories with me.

Recently, probably thanks to Amazon Prime Video, my daughter has developed quite the love for Nickelodeon’s “Bubble Guppies”. She is two years old and already loves books and reading. “Bubble Guppies Guess Who’s Fin-tastic!” is the latest in the bestselling Guess Who format filled with all the popular characters from “Bubble Guppies” show! It includes tons of great “lift-the-flaps” to uncover fun surprises.

Official Premise: Come let’s explore and find out who is hiding under the sea! Dive into the world of the Bubble Guppy kids in the adorable board book featuring simple rhymes that encourage preschoolers to “Guess Who” is hiding under each flap. The “stay shut” flap on the front cover makes this a favorite book that little hands grab onto again and again.

Disney is not dumb at all. They released a free app for kids called “Disney Palace Pets”. Parents probably though…”Hey, it’s free”. But I have spent more money in Disney Palace Pets merchandise in the last few months than any other Disney product. There are not only the app but also action figures and other books as well. But let you tell you I love everything that comes out of this series. When I see my daughters face when you interacts with these characters, there is nothing better in the world.

Official Premise: Young Disney Princess fans will have hours of fun listening to the rhymes and guessing which adorable Disney Palace Pet is hidden behind each flap in this enchanting hardcover book that includes sparkly glitter on the cover. With their hug-me expressions, big eyes, and dainty curls, characters such as Aurora’s darling kitty, Rapunzels’ prancing pony, and Cinderella’s playful pup are sure to win everyone’s heart.

This new book,  “Disney Palace Pets: Guess Who Castle Cuties” features our favorite Disney Princesses and, of course, their pets. The text is simple and rhymes well. It also includes sturdy flaps to lift and find these little cuties. This is a not a flimsy book each. I have seen numerous flap books that rip right away but this one is holding up well. I have no idea how my daughter does it but she not only knows ever Princess but also their corresponding Palace Pets. A must have book 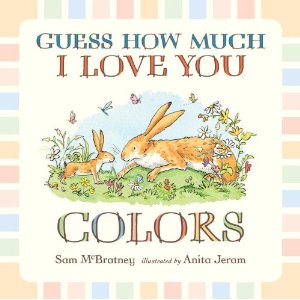 Now that I have a 7 month old daughter, I have realized the importance of board books.  The Nutbrown Hares are such a cute bunch of characters.  They are simple books yet they are still educational.  This edition focuses on “Colors”.  It is very short running only 14 pages but is very good way for kids to learn about colors.  My daughters favorite color (or so we think right now) is green and she really lit up when that page came around in this book.

Official Synopsis: Is there a color that Little Nutbrown Hare doesn’t like? Here’s a beautiful red flower to sniff, a blue-winged bird to make friends with, yellow daisies to pick, and a leaping green frog to chase. But when it comes to brown, that’s a color to love, not just like — especially if it’s related to Big Nutbrown Hare!

The author of the book is Sam McBratney, who is behind the “Guess How Much I Love You” series and teamed up again with Anita Jeram, who is the illustrator of these storybooks.  There is something about Anita’s illustrations that I just love and I know my daughter appreciates very much.  These board books really deliver a lot in a very small amount of space.  I can’t wait till the next chapter is released. If you have young babies or toddlers, then I highly recommend this to entertain and still learn.