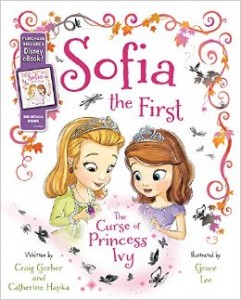 What little girl doesn’t love Sofia the First. This show started when my daughter was about 6 months old and I knew that Disney Junior was going to make a nice mark on the Disney Princess market with this character. Fast forward about two years and this show is easily one of Disney Junior’s biggest entities, especially with the girls. The books are just as amazing as the show itself. They showcase some of the series’ biggest episodes usually featuring a classic Disney Princess.

“Sofia the First: The Curse of Princess Ivy” Official Premise: Sofia faces grave danger when she faces Princess Ivy, a once exiled princess who is determined to take over Enchancia and turn the whole kingdom black and white. Sofia and Amber must work together to save their family and their kingdom!

Like I mentioned, this story is eventually going to make it to the small screen as a Disney Junior movie event airing Fall 2014. It features the now classic Disney Princess Rapunzel from “Tangled”. This book like previous Sofia books feature some really beautifully illustrated artwork within this hardcover jacketed picture book. The book like past in the series also includes a downloadable Disney eBook of the story for your iPad/iPhone. Can’t wait to see what they come up with next. There are plenty of great Disney Princess still left!