When some of Europe’s biggest soccer clubs become involved, it’s a sure sign that there is money to be made. Soccer’s voracious appetite for money is legendary and when it comes to exploiting market segments, few sporting organisations are better than soccer clubs.

City signed their first eSports player others are ahead of that curve. For the clubs, it’s all about brand exposure. Tara Warren, executive director of communications at West Ham, explained that digital and tech are the club’s priorities as far as brand awareness is concerned. eSports and the professional game enjoy a symbiotic relationship.

So too do other sports and the burgeoning eSports, which is of little surprise when the market is estimated by some analysts to be worth $1bn in 2018. Global sport finance specialists, Deloitte, offers more caution, predicting significant – but smaller – growth, a point with which the Financial Times agrees.

It’s clear that some areas of eSports are more established than others. While the winners of the Interactive FIFA World Cup receive £20,000, the winning team at the International Dota 2 Championships get £6.7m. To put it into context, the winner of the Men’s Singles at Wimbledon 2017 will walk away with a cheque for £2.2m. According to the BBC, the total prize money won globally in 2016 was a staggering $93.3m.

Premier League involvement may see the FIFA money increase; 600m players worldwide mean that each year’s new version of the game pulls in more money than the previous edition.

And if you’re still not convinced eSports is the real deal, consider this. An ESL Gaming initiative, in co-operation with NADA and working toward WADA recognition, is to outlaw the use of Performance Enhancing Drugs (PED) which blight other sports. eSports has arrived.

Taking Advantage Of The Tools To Hand

All this from humble beginnings when groups of players met at conventions for multi-player tournaments. Now, most online bookmakers offer a full market on events, while Betway Sports made the headlines last year when they became lead sponsor of Ninjas in Pyjamas, one of the world’s most famous eSports teams.

Despite the money involved, there’s still a perception in the wider world, that eSports is a fad, a new toy whose novelty will soon wear off. Nothing could be further from the truth; eSports will evolve in the same way other professional sports did.

It wasn’t until the mid-1980s that the UK bought into American football. Since then, it has grown through a path of two steps forward, one back. Now more popular than ever, the Super Bowl is becoming an ‘event’ in its own right in these green and pleasant lands.

eSports is unlikely to follow a similar trajectory. It’s very nature puts it front and centre of the technological world we live in today. Any advancements are likely to pull eSports along with them, giving it an immediate advantage on those which went before.

There’s little sign of the growth stalling. It may slow down in coming years but with studios producing games deliberately designed for the eSports, as well as the domestic markets, the signs are that there is much more to come.

Perhaps the biggest danger is the internal perception. With prize money commanding staggering sums, there is bound to be a schism at some point. Those who want the ‘purity’ of their eSports retained will reach a point where the mainstream popularity is too much for them. A bit like fans of a band who after years of working the club circuit make it big but some resent their ‘precious’ being popular.

That won’t matter much in the overall scheme of things. As eSports gains in popularity and the additions outweigh the churn of players, there is no problem. BI Intelligence reported that 300m people “tune in” to eSports today, with projects of 500m by 2020. With that kind of reach, the cliff edge seems some way off.

It’s important to remember that as an industry, professional eSports is less than a decade old. Amateur level occupies the same level as Comicon, where the participants are viewed as obsessives. Professionalism confers a different status and in a young industry, there are still plenty of revenue streams to exploit.

Indeed, there are more games to exploit. The genres may be well defined but the games themselves are limited by technology and human imagination. So long as the studios come up with original ideas, as well as iterations of games which capture the imagination of the players, there is a market for eSports.

When we recently interviewed Doug Lussenhop aka DJ Dougg Pound, he said that he told us that he tried doing both stand up and playing in bands but wasn’t good enough at either one. He said he enjoyed most doing a combination of both. That combination makes up this really a fun and entertaining CD. It reminds contains a great mix of of comedy and music. It will leave you repeating the lyrics immediately after your first listen for sure.

I had the privilege of seeing DJ Dougg Pound perform live in NYC during a Tim and Eric show years ago and he easily stole the show. He was fun and entertaining and luckily some of the tracks he played or available on this record like the great track “Who? (Remix)”.  If you like Tim and Eric-type of humor and music, this is a must purchase.

“Pound It” is a high energy song and a great start to the album. Though my favorite track is easily “Numb My Gummies”, it is very funny and has stuck with me for days after my first listen. Normally when skits and music are mashed together, I find myself skipping the dialogue to get to the music…though not with this one. The question is asked “Do you want to hear the remix” at the end of each skit and the remix is basically a coked-up techno remix of the skit, mixed with music and pop-culture. The collaboration of the two work really well and links each track together almost seamlessly.

The album was score at 4.5 out of 5 stars, only due to the fact that I was left wanting more. I wish the album could have been double the length.  The tracks are produced very well and sound very sharp. I look forward to future albums from DJ Dougg Pound and I have a feeling this album is going to spend many years on my iPhone’s playlist. 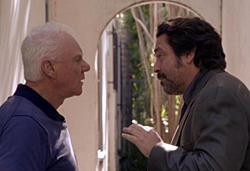 I am not sure how to really categorize this film.  I feel that it falls between a mix of character drama and a touch of thriller.  It it enjoyable to watch but leaves you with open ended questions. Malcolm McDowell is a hell of a fine actor and he gets to shine in this film.   Angus Macfadyen also gives an intense performance as well.  The subject matter is deep in the world of prostitution and cover-ups, though I feel it only really scratches the surface on each one.

If you unaware of the story this is based on true events.  Noah Melville (Malcolm McDowell), a college professor, is a favorite amongst his students but also runs a prostitution ring to promote scholarships.  When one of these meetings goes array the situation ends in murder and the cops start suspecting Noah. Detective Patrick Kelly (Angus Macfadyen) becomes obsessed with getting to the bottom of this mystery.

Overall I wanted to really enjoy this film and the performances were very good but I had a problem with it’s message.  We were left wanting to feel bad for Noah Melville claiming he is just looking to help his students and they want us to forget that he was selling them as services.   I would have liked to see more background in the story of why Noah was performing in the his acts of prostitution.