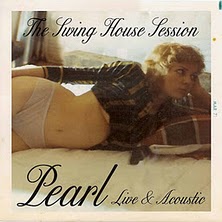 “The Swing House Session: Pearl (Live & Acoustic)” is the latest release from Pearl. The album features 10 acoustic tracks 9 of which were originally featured on Pearl’s 2010 debut release titled “Little Immaculant White Fox”. The 10 tracks on the album were recorded live in one session and feature Pearl, Scott Ian, Jim Wilson, Marcus Blake and Nalle Cole. The session/album was produced by Jay Ruston (The Donnas, Meatloaf).

This album has a really cool laid back vide which I felt was very reminiscent of some of those great mid 60’s era releases. It was almost impossible to tell that this album was created live as the performances are just so seamless. Pearl’s voice is rich and soulful which only adds to the impressive string section compiled for the session. The big stand out track for me was the cover of the classic John Prine song “Angel From Montgomery” while tracks such as “Rock Child” and “Check Out Charlie” also transferred really well into acoustic form. Fans of Pearl’s rock album and fans of acoustic music in general will surely want to take a listen to this album.

Also be sure to check out our interview with Pearl located in the interview portion of the site.