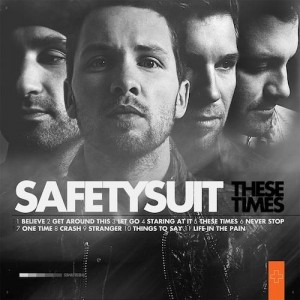 “These Times” is the latest release from the pop/rock band SafetySuit. The album is being released via Universal Republic and is the follow up release to the bands 2008 album titled “Life Left to Go”.
“These Times” debuted January 3, 2012 on ITunes where it spent two days as the number one most downloaded album.

Right of the bat I found the 11 songs contained on “These Times” to all have the potential of becoming hits. Despite the number of various producers on this album all the tracks had a very good flow and each track seemed to complement the next. The album featured a variety of tones and textures providing something new each time you listen to it. The band also does a great job blending a multitude of music genres which only seems to add to the appeal of this album. Tracks such as “Never Stop” and the upbeat song “Crash” were strong personal favorites of mine. After listening to “These Times” several times over it was really no surprise as to why the album spent two days at the top of the ITunes chart. Fans of music in general will want to check out this album.