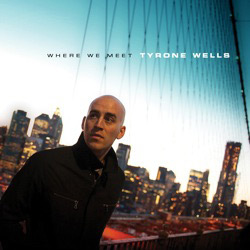 “Where We Meet” is the 5th full length album from singer/songwriter Tyrone Wells. This album is the first release from Wells since his departure from Universal Republic. Produced by Bill Lafler and Thomas Doeve the album features 11 brand new tracks which are being released via Position Music.

The latest release from Tyrone Wells features 11 feel good arrangements that have the power to turn a bad day into a good one. “Where We Meet” features a straight forward production approach which allows the musicianship and vocal abilities of Wells to shine. The opening number titled “Freedom” provides a calming mood which instantly sets the tone for the later tracks on the album. I personally enjoyed the song “I Can’t Save You Now” which blended Well’s voice and guitar playing with a steady back beat of drums and piano. If you’re feeling down and need a pick me up or just want to listen to a feel food album Tyrone Well’s latest release “Where We Meet” will do the trick. For those wishing to check out Well’s live he will be kicking off a 38 date U.S. tour on March 20th in Provo, Utah.