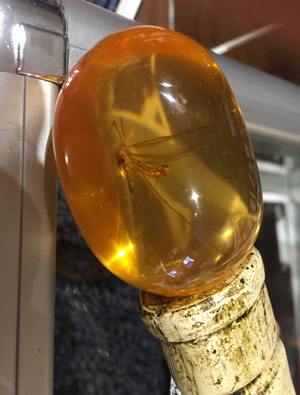 This week New York film fans and prospective collectors have a unique opportunity to check out an array of props and costumes from Profiles in History’s upcoming ‘Icons & Legends of Hollywood’ auction. The auction, set to take place in Los Angeles June 5th, 6th, 7th and 8th, features over 2000 pieces dating all the way back to the silent era.

I got a chance to take a tour of this exhibit which opened yesterday to the public and will be on view through Saturday, May 19th at The Society of Illustrators located at 128 East 63rd Street.

Besides showing costumes from stars of Hollywood’s golden era such as Charlie Chaplin, Elizabeth Taylor and Groucho Marx in startlingly pristine condition, some of the props on view are among the most iconic in Sci-Fi history.

I was first shown Ripley’s spacesuit from the first Alien as well as a helmet worn by John Hurt. They were joined in this show by Ripley’s flamethrower from Aliens, apparently an actual flamethrower!

For children of the 80s and 90s however, I think the real highlights of this collection might well be Michael J Fox’s hoverboard from Back to the Future: Part II (a hole is in it of course because Marty ripped the handle bar off of it), Richard Attenborough’s amber-topped cane from Jurassic Park and a rather roughed up biker jacket from the Arnold Schwarzenegger’s arrival in The Terminator.

This show is truly just the tip of the ice berg for this massive auction which has memorabilia ranging from just a couple hundred dollars to those soaring with estimates over $100,000. However if you’re only looking to drop a couple bucks to take a look at these items up close but not take home, do not miss this show!

More about Profiles in History: Icons & Legends of Hollywood 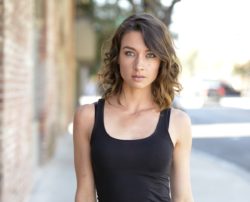 Cortney Palm has been making her mark in Hollywood and securing her role as a scream queen with roles in films like “Silent Night” (2012), “Zombeavers” and “The Dark Tapes”. She also co-starred in the film “Sushi Girl” alongside Mark Hamill in 2012. Recently she is starring in the film “Death House” alongside about a dozen of horror icons including Kane Hodder, Tony Todd and Dee Wallace. Cortney took out some time to chat with Media Mikes (again) to discuss the film and her love for the genre.

Mike Gencarelli: How did you get involved with the film “Death House”?
CP: I had received message from director Harrison Smith via Twitter saying that some things had developed and he was interested in sending me a script. The script was “Death House”, and after I read it I thought I HAD to be a part of it. My managers got involved and literally a few days later I flew out to Pennsylvania to film.

MG: You are no stranger to ensemble casts after working on films like “Sushi Girl”, but tell us what was it like working with so many horror icons?
CP: Each actor brought something unique to set. An embodiment of their work and who they are as people. It’s always a joy to work with actors who have had long careers because you can learn so much from them. Kane (Hodder) and I did some improv that added depth to our characters and Barbara (Crampton) was so great in that we would work the scene before we filmed, which helped a lot.

MG: What drew you to your character Agent Toria Boon?
CP: I love her character arc. She clearly has a distinct past and simultaneously a past that is unfamiliar to her. Was it a part of a scientific test? Or something she’s trying to bury? But throughout the film she begins to unravel and question reality and her mission. I’ve always been drawn to strong female characters and agent Toria Boon is a badass, so that helps.

MG: Give us a fun behind-the-scenes story from the production?
CP: There was this one room in the prison, it was the freezer room, that we had to film in. It felt like bad juju. the camera crew had burned incense and wore crystals, but for some reason that room really took a toll on a few of us actors. Was it supernatural play? Bad energy? Or something that wanted to drain us. Whatever it was, it was a very difficult room to film in.

MG: I can see “Death House” being a great franchise, what horror icon would you like to see on board for future films if they happened?
CP: Honestly, Jamie Lee Curtis or Sigourney Weaver.

MG: How does it feel to be earning the status of scream queen in the horror genre?
CP: Am I? *Blushes* Horror films are so much fun to make. They take a lot of work, more than what people think. Buy they’re some of my favorite movies to work on, so I appreciate the fans who like to watch my work!

MG: Do you have any other projects upcoming that you would like to shout out to?
CP: “Hooker Assassin”
“Your Own Road”
“Sunflower”
“Dead Ant”

James Furlong and I also are co-producing an action/drama called “Savvy Strong”, where I play an ex-marine out for vengeance. We having a production team on board and are looking to secure more financing.