Cortney Palm is part of the ensemble cast of the new film “Sushi Girl”. She is playing the title role along with a great genre cast of Mark Hamill, Tony Todd, James Duval and Noah Hathaway. Media Mikes had a chance to chat with Cortney about the role and working with an all male cast.

Mike Gencarelli: How did you get involved with “Sushi Girl”?
Cortney Palm: I had gotten called to audition by Zora DeHorter who was doing the casting for the film. I went in to read and I really liked the writing however I didn’t think my audition went that well. I ended up getting a call back and thought of that as a way to redeem myself. I went to the call back and they told me I had done really well. I sent a follow up email to Zora after the audition as a thank you and she replied saying that they were very interested in me. I had a third call back and I had figured it was between me and someone else. The third audition basically was to see if I was comfortable with being nude, as I had already gotten the part. It was really exciting!

MG: How was it working with such a great male led cast?
CP: Those guys were all so funny! Mark Hamill is funny as can be and James Duval has these stories that he was always wanting to tell everyone [laughs]. I was always laughing and they had to yell at me to stop moving the sushi. I am the only female in the film but it’s invigorating and I love being an empowered female. The film is very powerful and all the guys were really great.

MG: Can you tell us any interesting stories from the set?
CP: There were a lot. The first day I was fairly nervous as I was going to be surrounded by some real iconic actors. To lighten the mood Mark Hamill walks in and asks me if I was wearing a body stocking. It made me feel really good. I figured the lights must have made me look really good because I wasn’t wearing one. Another time James Duval was telling us about a piano bar he goes to and how he is always being recognized from “Independence Day”. It was fun just talking about being actors in everyday life.

MG: How would you describe the film?
CP: Kern Saxton and Destin Pfaff are just excellent writers. Within their writing you can find such great characters with really good dialogue. Each character is so distinct in their motive or action that it really brings to life every piece of the puzzle. The film keeps you on the edge of your seat and wondering what’s going on with each character. I think Kern Saxton is going to be a break out director! 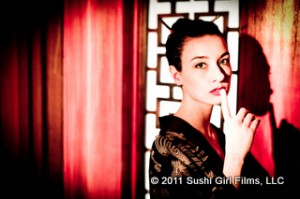 MG: If you could choose one person to work with whom would it be and why?
CP:I want to work with James Cameron, he’s inspired me since I watched “Titanic” 13 times in the theater and Clint Eastwood who said I was stunning while working as a background performer on the set of one of his recent films. I love Emily Blunt and Julia Roberts and I would feel honored to share the screen with them as well as Tom Hanks and Zach Efron. Just to name a few.

MG: Do you have any other upcoming projects?
CP: I just wrapped a short film that was shot by Trisha Gum. The film is called “Losing Ferguson” and it’s going to be hitting the festival circuit soon. The story is about a girl who has been living in this imaginary world do to a past trauma. The girl begins to grow up and suddenly loses her imaginary friend. It’s a really good story.