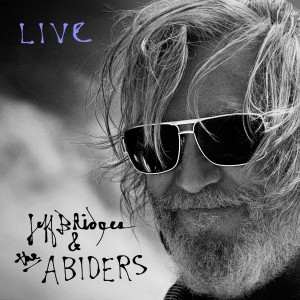 When I saw Jeff Bridges rock out in “Crazy Heart”, I feel in love with his voice and his style of folk music. When he released his self titled album back in 2011, I couldn’t stop listening and honestly, still haven’t today. When I saw that Jeff and his band was touring. The live album was record this past summer at the Red Rock Casino in Las Vegas, NV. I was hoping this album was going to be as great as Jeff’s self-titled album but I was left wanting more.

This album includes live recordings of songs from Bridges’ debut album “Be Here Soon” and self-titled album on Blue Note Records, as well as original music from the film “Crazy Heart”. There are also his take on classics like The Byrds’ “So You Want to Be a Rock and Roll Star”, Townes Van Zandt’s “To Live Is to Fly,” and Creedence Clearwater Revival’s “Lookin’ Out My Back Door.” Also included is a new track by songwriter friend, John Goodwin, called “Exception to the Rule.”

The band, Jeff Bridges & The Abiders, consists of Jeff Bridges on vocals, guitar, keyboards, Chris Pelonis on guitar, keyboards, vocals, Bill Flores on pedal steel, guitar, Randy Tico on upright, electric bass, and Tom Lackner on drums, percussion. I heard that Jeff’s daughter Jessie Bridges, who has an amazing voice as well, and that was recorded on the album as well.

The album it is called “Live” and I was hoping for a live recording of a concert but instead we get here a collection of live songs instead. I thought that the transition between the tracks felt really choppy and didn’t flow well. Plus I do love the song “Blue Car” but it is not really a great kick off track. “What a Little Bit of Love Can Do” is easily the most energy on the album with “Fallin’ & Flyin'” is a close second.

I have never seen him and his band live but I heard great things. I hope that he eventually makes it over to the Florida area…if anyone is reading this, PLEASE MAKE THIS HAPPEN! Even though, I wasn’t a huge fan of these live tracks, I am sure that the vibe and live performance of a complete show is much better than this, so if you can get a chance see him live, I would recommend it.