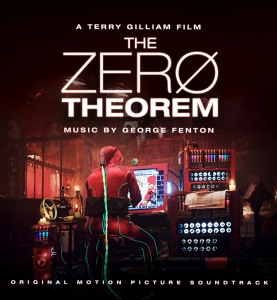 “The Zero Theorem” is the newest sci-fi extravaganza directed by legendary director Terry Gilliam (“Brazil”, “Fear & Loathing In Las Vegas”, “Twelve Monkeys”). I have been following this film for a long time and I was very excited that the score is being released way in advance of the film. In fact the film at the time of writing does not have a US theatrical release date. If you watch the trailer to this film you can tell that is going to be quite the trip, this soundtrack is a perfect compliment to the film. What it succeeds in is making me REALLY want to see this film now. No question, this is already one my favorite scores of 2014.

If you are a fan of Terry Gilliam’s films, like myself, then you will know how important and the music to the film. I still have the “Brazil” score on my phone for many years. Well there is no change here and the score plays a very significant role in “The Zero Theorem”. Acclaimed composer George Fenton really does a wonderful job with this score score. It ranges from combining simple classical moments then mixed with exciting futuristic, electronic tracks. I also really enjoyed the new rendition of “Creep” performed by Karen Souza. I can’t wait to see how it ties into the film itself. I have had this album on loop since receiving it and I do not see that changing for many months to come! Highly recommend checking this out!