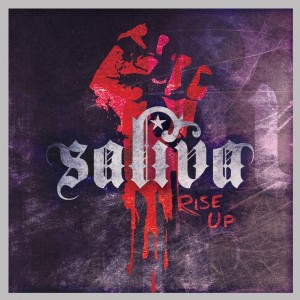 Hard Rock heavy hitters Saliva are back with their 9th studio album titled “Rise Up”. The album is being released via Rum Bum Records and features 12 all new tracks produced by Bobby Huff. “Rise Up” marks the true revival of Saliva, presenting the band doing what they do best true, gritty, heavy rock n roll.

When any member of a band leaves in inevitably changes the makeup and camaraderie of the group. However when it’s the groups lead vocalist not only do the previously mentioned factors change but so does the biggest factor. The groups sound. Former Saliva vocalist Josey Scott had a very signature style which was captured on the groups break out hit “Click, Click Boom” laying the foundation for the groups sound up to his departure from the band in 2011. Scott’s replacement Bobby Amaru now in his second release with the band has taken what Scott created and took it to the next level. Though “Rise Up” is not Amaru’s first recording with the group it is certainly his strongest. Songs like the “Rise Up”, “Redneck Freakshow” and “Army” are classic Saliva with an updated feel make this album one you will certainly want to pick up and have on hand for those quickly approaching summer barbecues.

As I said before anytime a founding member leaves a band things are going to change sometimes for worse sometimes for better. In the case of Saliva’s latest offering “Rise Up” it’s certainly for the better as the band sounds stronger than they have in years.