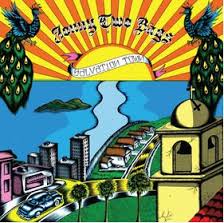 I really enjoy when guys like Jonny Two Bags are able to step outside of their comfort zone and in to the lime light. Not only does it show tremendous character but for me it elevates them to whole new level of musicianship. A good example of this is “Salvation Town”. Though this may be Jonny’s debut release it’s as if he is a seasoned pro. Half Cash and half Dylan Jonny’s voice is familiar yet fresh while the instrumentation is catchy and keeps your attention throughout all 10 tracks. Tracks such as “One Foot in the Gutter” and “Hope Dies Hard” were personal favorites as each was stylistically different yet seemed to be well crafted and thought out. Other notable tracks worth checking out were the accordion backed “Clay Wheels” and “Then You Stand Alone” which features a guest performance by none other than Jackson Browne.

Though very different from the hard and fast punk music Jonny is normally associated with “Salvation Town” does a great job showcasing a completely different side of Jonny’s musical style making this album certainly worth checking out.