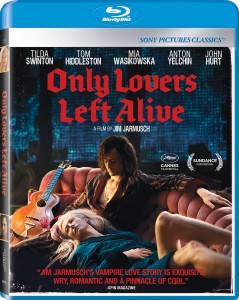 If you aren’t familiar with the work of Jim Jarmusch…let’s just say his films are an acquired taste. Very arty and poetic usually filled with his unique humor. “Only Lovers Left Alive” is no different. This is definitely a visual trip with some great underground music and amazing performances from Tilda Swinton and Tom Hiddleston. They are also backed with great supporting cast including Mia Wasikowska, Anton Yelchin and John Hurt. With those people fed up with the overflow of vampire flicks, this is a unique and interesting spin the genre. Probably not a film that I can watch every day but definitely enjoyed it and worth checking out just for performances.

Official Premise: The tale of two fragile and sensitive vampires, Adam (Tom Hiddleston) and Eve (Tilda Swinton), who have been lovers for centuries. Both are cultured intellectuals with an all-embracing passion for music, literature and science, who have evolved to a level where they no longer kill for sustenance, but still retain their innate wildness. Their love story has endured several centuries but their debauched idyll is threatened by the uninvited arrival of Eve’s carefree little sister Ava (Mia Wasikowska) who hasn’t yet learned to tame her wilder instincts. Driven by sensual photography, trance-like music, and droll humor, Jim Jarmusch’s “Only Lovers Left Alive” is a meditation on art, science, and the mysteries of everlasting love.

Since the film is being released on Digital HD, I would have hoped that Sony Pictures Classics would have included an Ultraviolet code but that is a negative. The studio did the same thing with The recent documentary “Jodorowsky’s Dune” as well. The Blu-ray does includes a solid presentation including a very well shot 1080p transfer. You know that Jarmusch had a specific look he was aiming for this film and it is executed perfectly. The DTS-HD Master Audio 5.1 track works with the dialogue and the great music. The special features are a bit of a let down though. There is a spotlight on the director with “Traveling at Night with Jim Jarmusch”, a few deleted and extended scenes and a music video for Yasmine Hamdan’s “Hal”