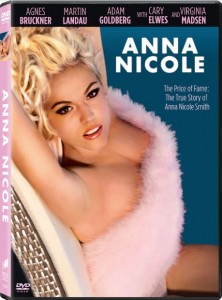 When I saw the cover for “Anna Nicole”, I would have sworn that it was a documentary about the late supermodel. Agnes Bruckner (TV’s “Private Practice”) is really spot on with the looks and the nails this role. The film is based on the New York Magazine article ”Paw Paw & Lady Love” by Dan Paul Lee. It also packs a solid supporting cast including Martin Landau, Adam Goldberg, Cary Elwes, and Virginia Madsen. Growing up “adoring” Anna Nicole in her prime as a kid, I really enjoyed this behind-the-scenes look into her troubled life.

Official Premise: Anna Nicole Smith (Agnes Bruckner) was a single mother from Texas, who became one of the biggest supermodels in the world, but her sudden catapult to fame came with a price, as drugs, alcohol and reckless behavior led her down a tragic path. Now you get to see the whole story in this compelling original film, as Anna Nicoles sexual desires, crippling addictions and her overwhelming need to be famous lead her from incredible fame and fortune to her unfortunate descent.

This film also grabbed by attention since it comes from the Director of “American Psycho”, Mary Harron. I think she had a good vision and it shows both the rise and the fall of this supermodel quite well balanced. It is well-written thanks to John Rice & Joe Batteer (“Blown Away”, “Windtalkers”). If there are any fans out there still of Anna Nicole Smith, I would recommend giving this a watch for sure. Just remember this was made for Lifetime, so don’t expect any skin. The one thing that I was a little upset about that there are no special features included along with this DVD. I would have been curious to see about Agnes transformation into Anna Nicole.