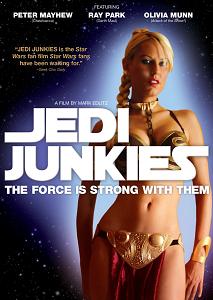 When it comes to “Star Wars”, am I a fan…OH YEAH! Am I crazy obsessed with “Star Wars” like these people in “Jedi Junkies”…OH NO! They are on a whole other level. This documentary is a showcase of some of the devoted fans of the franchise. The focus on this is really the fans.  It looks into conventions, fan films and the obsession of collecting. There are celebrity interviews Olivia Munn (“Attack of the Show”), “Phantom Menace” actor Ray Park (Darth Maul) and “Blair Witch Project” director Ed Sanchez.

“Jedi Junkies” is a one-of-a-kind feature film about the world’s most dedicated Star Wars fans. From lightsaber-wielding martial artists to a filmmaker who built the world’s only life-size Millennium Falcon, the film offers viewers a rare glimpse into extreme fans personal and professional self-expression.

The DVD comes with some decent special features. There is a commentary track from director Mark Edlitz. There are various deleted and extended scenes, these could have easily been put in the film since it was only 73 minutes to begins with. Lastly there are three featurettes including “The Stars of Star Wars”, “Build Your Own Action Figure” and lastly “The Cult of Slave Leia”.  If you are a fan of “Star Wars”, you should enjoy this documentary quite a bit and for those who aren’t it will change the way you look at the fandom that surrounds this whole world of “Star Wars”.