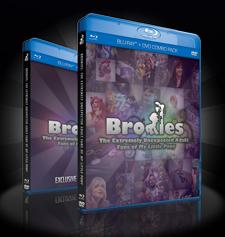 I recently had the chance to chat with “Star Trek: The Next Generation” star John de Lancie, check it out here, who is also the character voice of Discord in “My Little Pony: Friendship is Magic”. He told me about how his involvement with how the show lead to developing this documentary. One point that he made about the show, which I really agree with is that the show has a nice message of showcasing the elements of “harmony, being kind, generous, loyal and tolerant”. The documentary was funded by a Kickstarter project raising over $322,000 dollars, which was a record at the time. This told us not to underestimate the power of the fans. Anyone see what happened with “Veronica Mars” on Kickstarter? I think this project really brought a lot of attention to the idea of being a brony.

“Bronies: The Extremely Unexpected Adult Fans of My Little Pony” really gives the male fans of “My Little Pony” a chance to tell their story. We get to meet people from all over the world ranging from the United States to Germany to Israel to the United Kingdom. These fans show us their passion and their love of “My Little Pony”. We go to BronyCon, a convention focusing specifically on “My Little Pony” and get to see how fans have come together for their love of this show. There we get to meet the voices of the characters including John de Lancie, Tara Strong and series creator Lauren Faust. We also get to meet and see fans who have created numerous works of art including music, art and animation. It really delivers a nice message of why these people are obsessed with this show and gives them a voice.

The Blu-ray comes available as two separate releases including the Main Edition and the Extended Interviews. Both are available in a single discounted bundle under “Complete Edition”. The Main Edition is feature documentary with two bonus segments covering two European conventions: B.U.C.K. in the UK and Galacon in Germany. The Extended Interviews discs including longer interviews with Producers Lauren Faust, John de Lancie, and Tara Strong totaling over three hours. So there is a lot more than just an 80 minute movie here. To be honest, I think it would have been easier to just include these interviews on the Main Edition Blu-ray, instead of being packaged in two different discs/cases. Nonetheless, the fans are going to eat up this documentary and the additional bonus material for sure.