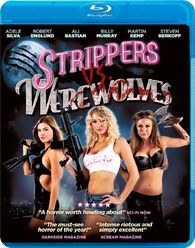 “Stripping have never neen so hairy!”, can you say no to a tagline like that? I think not. “Strippers vs. Werewolves” is exactely what you would expect and nothing more. It a great mix of comddy and horror. The film does have an impressive cast with Robert Englund (“A Nightmare on Elm Street”), Steven Berkoff (“The Girl with the Dragon Tattoo”), Sarah Douglas (“Superman II”), and Barbara Nedeljakova (“Hostel”). I heard about this tongue-in-cheek horror-thriller when I interviewed Barbara last year, check it out here, I was immediately interested. If you liked films like “Zombie Strippers” and “From Dusk Till Dawn”, then this is definitely worth checking out.

From Well Go USA’s official synopsis: “A war between strippers and werewolves ensues when a member of a bloodthirsty pack of werewolves is murdered in a famous strip club. The girls who work there have until the next full moon before the werewolves’ vicious leader sends his wolf pack to hunt down the killers and seek retribution. Problems arise for both parties when the wolf pack realizes the club owner is experienced in dealing with hostile lycanthropes and that one of their own is dating a dancer from the club.”

Well Go USA’s Blu-ray Blu-ray both looks and sounds great for a low budget film. It is nothing out-of-this-world but decent overall. The special features are lacking a bit though. They could have come up with some fun and entertaining extras for a film like this. There is a commentary with producers Jonathan Sothcott and Simon Phillips, decent but really a must listen. Would have loved to see the main three girls do a track. Lastly there is a Behind-the-scenes featurette. It is worth watching if you enjoy the film but runs way to short.