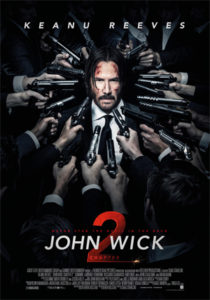 Picking right up where the previous movie ended, John Wick (Reeves), also known as “The Boogeyman,” is finishing off the lingering threats and hitmen who did him wrong from the first installment. But instead of easing back into a low-key and somber retirement, with a new dog in tow, he’s greeted by an old acquaintance, Santino D’Antonio (Riccardo Scamarcio). D’Antonio recruits Wick to help him take over a seat of power in the criminal underworld. Wick isn’t so sure, but Santino uses an old blood oath and three missiles to Wick’s home to sway him.

All the potential consequences and paths of this blood oath, as pointed out to Wick multiple times throughout, are Wick’s death. Luckily for Wick, and the audience, he’s the one who spends entire runtime dishing out death. Before the story even contemplates getting too muddled in specifics and new characters, “Chapter 2” takes a deep breath and once again stops itself from becoming too literal. Just like the original, character introductions are more about the person’s individual quirks, skills and ticks, than their actual name or purpose. And “Chapter 2” keeps the video games tropes around as everything is still paid through magical golden tokens and Wick’s gun is stuck on auto-aim.

This helps keep everything flowing as this sequel is about 30 minutes longer, but rarely dull. While “John Wick” was more about the man behind the blood hungry myth, the sequel appears to be more about Wick diving deeper into the world around him, including the Continental, the criminal safe haven, hangout and safe zone from the first film. The Continental is still shrouded in mystery, but the little depth that is revealed implies it’s a lot more than just a U.N. for gangbangers. It may be the actual cogs of society and government.

What made the original so good is that it never bogged itself down in realism despite the backdrop being New York City. Instead it collects visual actualities to prop up this notion that this alternative reality is percolating beneath the surface. “Chapter 2” expands this alternate reality by dropping visual indications on how all these backstabbing swindlers and emotionless assassins have managed to govern themselves. Murder is their business and they’re serious about it. The rules in this violent fantasy world are simple, habitual, rehashed for clarity, and never biased towards any of the heroes and villain.

“Chapter 2” also further establishes previous canon while building on fresh canon without having any of the new nuances become superficial. The violence is a lot more over-the-top, but played straight-faced for laughs. The killings are more gruesome, but never repugnant. Like much of the visually stunning set-pieces, like a room of rotating mirrors bathed in laser light, the violence is aesthetically pleasing. That’s because it’s visually relayed that Wick doesn’t love or sink his teeth into this line of work anymore, but does it as a necessity for survival.

The same crew from the first is back for more, providing an enjoyable and realistic continuation of a seemingly one-off story about a retired assassin out for revenge. He’s no longer out for revenge, but struggling with the underworld that wants him to be addicted to the rush and thrill of being a hired gun. Wick’s world is noir, retro, and techno all in one cohesive ball. The John Wick franchise is not only a great addition to the action-film catalogue, but a much needed renaissance for the CGI-heavy genre.

“John Wick” was easily one of the best films of 2014. It is fresh, raw and not afraid to give you the middle finger. Keanu Reeves is beyond badass in this movie…simply beyond. It is just an insane movie and has become the start of a fantastic new franchise. This new combo pack includes a 4K Ultra HD + Blu-ray + Digital HD + UltraViolet copy. Let me just say that if I wanted to show off my 4K TV and player with movie. I have a new flagship Blu-ray to demonstrate the features, no questions. This is a must purchase.

Official Premise: An ex-hitman comes out of retirement to track down the gangsters that took everything from him. With New York City as his bullet-riddled playground, “John Wick” (Keanu Reeves) is a fresh and stylized take on the “assassin genre.”

“John Wick” is one of the movies that I would highly recommend this is worth the upgrade to 4K UHD. The 2160p transfer in 2.40:1 looks outstanding. There is a huge increase in detail for this film obviously due to the higher resolution. When I compared the Blu-ray to this, I was literally blown away. This release contains the same Dolby Atmos track that was included on the Blu-ray release, and it is still as amazing. Wall-shaking! The 4K Ultra HD disc comes with the same set of special features as the previous Blu-ray release. There is an audio commentary track, six featurettes and a trailer.

An east coast kingpin by the name of Viggo (Nyquist) is furious. He’s just learned that the owner of a body shop struck his only son in the face. He’s called the owner to fume. He inquires about why the lowly proprietor would even think about laying a hand on his son. The man quickly retorts, “Your son stole John Wick’s car and killed his dog.” Viggo’s face quickly turns from anger to one of ominous regret and he quietly says, “Oh…”

John Wick (Reeves) is an unstoppable, former assassin, whose reputation is known throughout every little nook and cranny of the criminal underworld. Thing is though, he retired from his position as a contract killer, to settle into a normal life. Sadly that’s just not his destiny. His wife has recently passed, but before she died, she left Wick a memento of their love, an adorable puppy. The somber Wick quickly takes a liking to the pup that licks at his face and jumps with joy at the very sight of him. Wick also has another love in his life, his muscle car. He’s a complex man with simple pleasures. Before attempting normalcy with the love of his life, he was known as the guy you hire to kill the Boogeyman. So you can see why Viggo is less than thrilled that his numbskull son would even think about laying a hand on Wick, much less kill the last thing he had to remember his wife.

“John Wick” is slick, cool and fun as hell. It’s such a crowd pleaser, you would have suspected that a shoot-em up that’s so self-aware about its own gimmick would have been released against more tame summer action movies like the “Expendables 3”. The plot is alert to the fact that Wick is a larger than life character whose life and exploits exceed the length of the movie. That’s why were given so many verbal and visual cues that he’s a relentless machine that doesn’t stop until all the necessary blood has been spilt.

Leitch and Stahleski have spent their whole life performing stunt work and that really helps add to the craft of filming some of the more intimate hand-to-hand combat scenes. Writer Kolstad would appear to be an avid comic book/video game fan since his script relies so heavily on very little plot and first person shooter invincibility for Wick. I mean, he does get injured, but no real human being could shrug off a gaping wound and continue to tumble around like an acrobat. If there’s any marks against Kolstad in his fairly young career, it’s that he has an inability to find a correct time to wrap things up and allowed couple of lulls in what was a brute force adrenaline fueled movie.

There’s so much blood and violence, that the Reeves affable qualities make the more gruesome scenes light hearted in its own regard. Wick isn’t really a hero, but any time some Russian thugs senselessly kill a puppy, you’re going to have a lot of audience members eagerly awaiting revenge. What makes Wick pleasant is that he also doesn’t appear to take any kind of joy from killing, but views it as a way to rectify a universal wrong. Instead of shooting carelessly into a crowd, he waits for a clear shot, as to not harm any innocents. He also doesn’t want to kill anyone he doesn’t have to. If you’re looking for a sick, but pleasurable viewing experience, “John Wick” is your best bet.