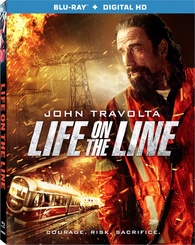 “Life on the Line” is the latest film starring John Travolta and surprisingly packs a solid supporting cast including Kate Bosworth, Devon Sawa and Sharon Stone. Besides the fact that Travolta looks terrifying on the cover with his facial hair and strange hairline. I am still a fan at heart! This film definitely has problems but it also has some decent action-packed moments. So I will call it a toss up for everyone and a maybe for us Travolta fans.

Official Premise: As a huge electrical storm sweeps towards Texas, lineman Beau (John Travolta) is haunted by memories of his brother’s death by lightning years earlier. Bailey (Kate Bosworth), the niece he helped raise, has a secret she needs to share with her boyfriend Duncan. But he and Beau’s brave team are racing to replace miles of power cables before the tempest strikes. Also starring Sharon Stone, Life on the Line is a tribute to the heroes who risk it all to keep us safe.

“Life on the Line” is being released as a combo pack with Blu-ray and Digital HD included here. The Blu-ray is presented in 1080p with DTS-HD Master Audio 5.1 surround. Both looks and sounds great especially when the action kicks in. The special features aren’t great though. There is a “Life on the Line” Music Video by Fiona Culley featuring Darius Rucker and some Behind the Scenes with Cast/Crew Interviews included.