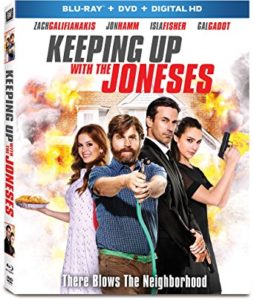 “Keeping Up With The Joneses” is a film that probably looks great on paper. They got a fantastic cast including Jon Hamm, Isla Fisher, Zach Galifianakis, Gal Gadot, Patton Oswalt. These are all top notch talent but the film itself just feel rather generic and not memorable at all. If you dig the cast like myself, it is worth checking out. I don’t regret watching it but at the same time I feel like I wasted 105 minutes and could have done something better with that time.

Official Premise: Go deep undercover in this hilarious action-comedy with an all-star cast including Zach Galifianakis, Jon Hamm, Isla Fisher and Gal Gadot. An ordinary suburban couple finds it’s not easy keeping up with the Joneses — their impossibly attractive and ultra-sophisticated new neighbors — especially when they discover Mr. and Mrs. Jones are covert spies embroiled in international espionage.

20th Century Fox released this as a combo pack with Blu-ray + DVD + Digital HD included. The 1080p transfer looks solid, no major complaints there. The DTS-HD Master Audio 7.1 is definitely a surprise but doesn’t really get a chance to show off its stuff. The special features are very special. There are two featurettes including “Spy Game” and “Keeping Up With Georgia”, which cover the behind-the-scenes with the cast/crew and lastly there are some deleted scenes included.