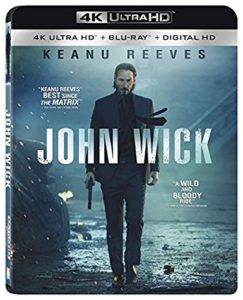 “John Wick” was easily one of the best films of 2014. It is fresh, raw and not afraid to give you the middle finger. Keanu Reeves is beyond badass in this movie…simply beyond. It is just an insane movie and has become the start of a fantastic new franchise. This new combo pack includes a 4K Ultra HD + Blu-ray + Digital HD + UltraViolet copy. Let me just say that if I wanted to show off my 4K TV and player with movie. I have a new flagship Blu-ray to demonstrate the features, no questions. This is a must purchase.

Official Premise: An ex-hitman comes out of retirement to track down the gangsters that took everything from him. With New York City as his bullet-riddled playground, “John Wick” (Keanu Reeves) is a fresh and stylized take on the “assassin genre.”

“John Wick” is one of the movies that I would highly recommend this is worth the upgrade to 4K UHD. The 2160p transfer in 2.40:1 looks outstanding. There is a huge increase in detail for this film obviously due to the higher resolution. When I compared the Blu-ray to this, I was literally blown away. This release contains the same Dolby Atmos track that was included on the Blu-ray release, and it is still as amazing. Wall-shaking! The 4K Ultra HD disc comes with the same set of special features as the previous Blu-ray release. There is an audio commentary track, six featurettes and a trailer.