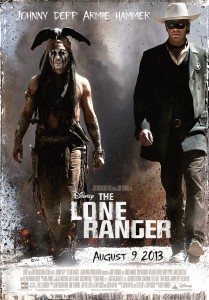 My father grew up watching “The Lone Ranger”. Whether it was Clayton Moore or John Hart donning the bandit style mask, my dad sat in front of the TV watching the 221 televised adventures of “The Lone Ranger”. I even remember my dad trying to bestow upon me the same excitement he had watching it. He didn’t want to just relive the adventures, he wanted me to feel that same spark of joy he once had. It never caught. I grew up on animated shows like “Mighty Max” and was drawn by the bleak world of crime portrayed in “Batman: The Animated Series”. The black and white TV show just didn’t resonate with me. Now that I’m older and understand what my dad was trying to do all those years ago, I was hoping Disney could rejuvenate those feelings once felt by thousands upon thousands of children during the 50’s. Sadly they’ve let me down.

A lone train chugs across the barren desert. Aboard is John Reid (Armie Hammer), a clean shaven man who puts his faith in the law. Farther down in another train cart, chained to the floor is the gritty looking and notorious outlaw, Butch Cavendish (William Fichtner). Next to him is the odd Native American, Tonto (Johnny Depp). These are our three main players. After Butch escapes, John travels into the harsh and unforgiving wild with a group of Texas Rangers to track him down. Butch and his gang of thugs ambush and savagely murder the group. Tonto then comes across the grisly scene of seven bodies lifeless in the dry heat. He digs seven holes to bury the dead, but a white horse stands at John’s resting place. To Tonto, it represents a spirit, telling him that John may have died, but he is alive again and will help Tonto in his journey to rid the land of evil.

I’m not sure how the Lone Ranger is suppose to act or appear, but Armie Hammer has a commanding presence on screen. He’s very likeable as the rugged hero. Fichtner would have been a fantastic villain if there was more exposition, but he still gives off some pretty wicked vibes with his implied taste for human flesh. Seriously. Tonto in the original series was meant to be a spiritual guide, but in this movie the character comes off as the Native American version of Jack Sparrow. It’s easy to compare this movie to the “Pirates of the Caribbean” series because of director Gore Verbinski. If that isn’t enough the writers of “Pirates” (Terry Rossio and Ted Elliot) are tagging along as well. They’re joined by Justin Haythe(“Snitch” and “Revolutionary Road”) who most likely added to the difficulty of updating a classic character.

There are a multitude of times during this movie you can tell these three were struggling to jam their ideas in. This leads to a long and unfocused flick. Concepts are barely fleshed out and some scenes serve no purpose. Instead of completing or simply removing them, every scene is glued to the next by an action set. The action sequences are fun to watch, but they’re not dripping with peril. We’re given plenty of “will he live?” scenarios where we know the outcome is yes. Yes they will live. When we’re finally able to take a breather, we’re treated to a gorgeous landscape and sets that have a fantasy twist on the old west. Vibrant colors cover the rustic feel of towns and businesses. One of my favorite scenes involves our heroes visiting a brothel. Some of the establishing shots are quite breathtaking. Towering rocks chiseled from years of weather and patches of vegetation bravely fighting the coarse sand surrounding it.

Even with it’s meandering, I will admit, the last half hour feels magical. William Tell’s Overture kicks into gear as explosions rock the ground and we’re finally watching the “Lone Ranger” deliver justice. The classical piece by Rossini, made famous during the Lone Ranger’s radio time, stills packs a youthful sense of excitement as gun smoke fills the air. In that moment I realized that somewhere in the early stages of this movie, when all three writers gathered and collaborated, there was a wonderful and enchanting story with memorable characters waiting to capture the wild west imagination. As well as delight the hearts and minds of both young and old viewers. Instead we’re left with a movie that has an identity crisis and expects puns on the classic TV show to cover it’s weaknesses.