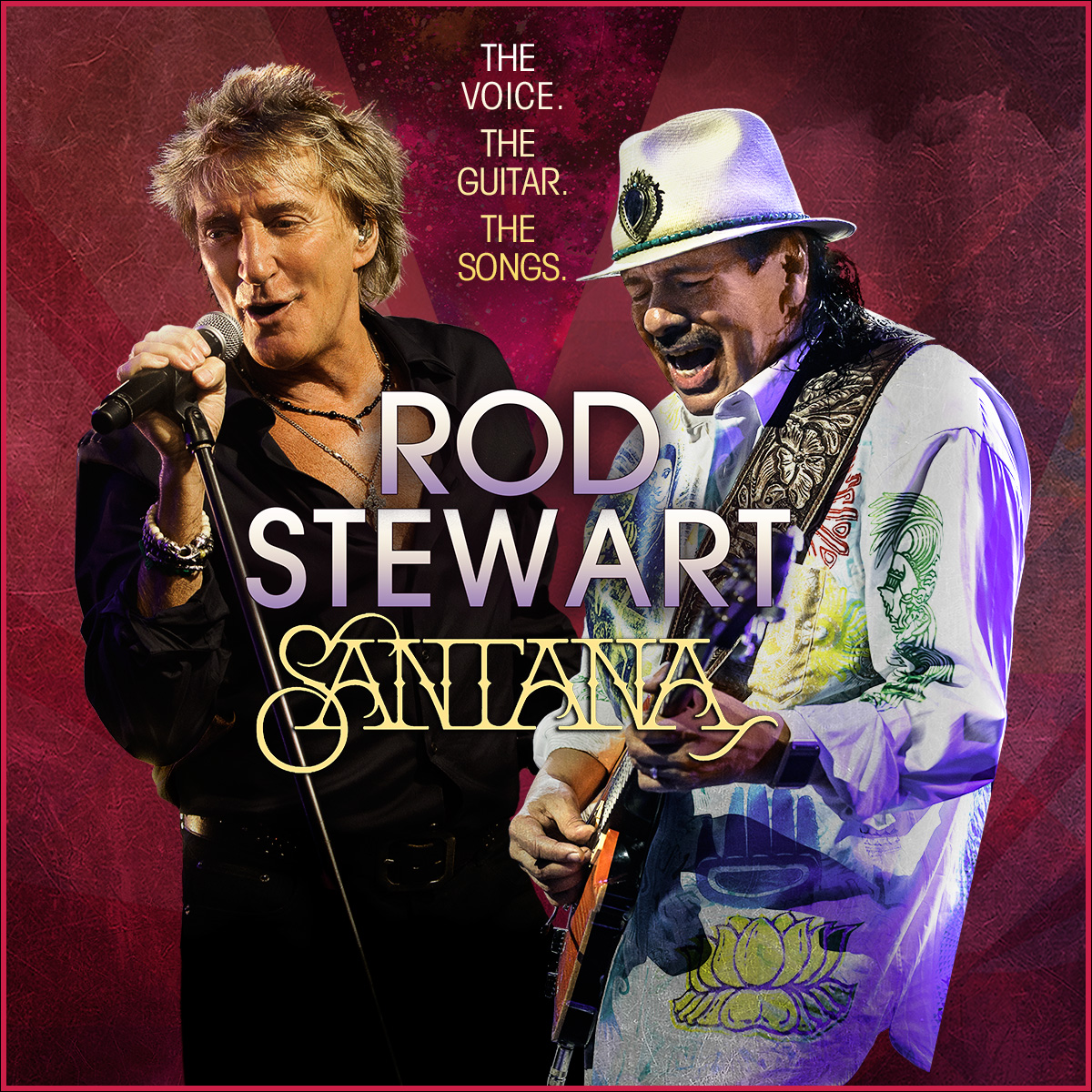 Media Mikes is teaming up with AEG Live to giveaway two (2) opening night tickets to ROD STEWART AND SANTANA: THE VOICE, THE GUITAR, THE SONGS North American Tour in Albany, NY.  If you would like to enter for your chance to win one of this amazing prize, please leave us a comment below or send us an email with your favorite Rod Stewart and Santana songs. This giveaway will remain open until April 11th at Noon, Eastern Time. This is open to our readers in US only. One entry per person, per household. All other entries will be considered invalid. Media Mikes will randomly select winners. Winners will be alerted via email.

Rod Stewart and Santana, two of musics most influential hit makers and dynamic live performers, will join forces and embark on an 18-concert North American tour this summer. Kicking-off May 23 in Albany, NY, the tour unites two musical trailblazers who have helped redefine the sound of popular music for the last five decades through their combined love of rock, soul, world rhythms, funk, jazz and blues. Both Stewart and Santana are known for their high-energy, hit-packed live concerts — making the combination an incomparable experience for all music fans.

With his singular voice, narrative songwriting and passionate live performances, Rod Stewart has built one of the most successful and enduring music careers of all time. In a career spanning more than five decades, he has amassed sales of more than 150 million albums worldwide and has countless chart-topping hits and industry accolades – including two inductions into the Rock and Roll Hall of Fame. In 2007, he was bestowed Commander of the British Empire (CBE) by the Queen of England. In May 2013, Stewart released Time, his first rock album in a dozen years, on Capitol Records. The album features 11 original tracks and marks Rods return to songwriting after nearly two decades. Time entered the UK Albums Chart at No. 1, setting a new British record for the longest gap between chart-topping albums by an artist — and in the US, it marked Stewarts highest-charting album of original material since 1979. In addition to touring, Stewart headlines one of Las Vegas most critically and commercially successful residencies at The Colosseum at Caesars Palace.

For forty years and as many albums later, Santana has sold more than 100 million records and reached more than 100 million fans at concerts worldwide. To date, Santana has won ten GRAMMY ® Awards and three Latin GRAMMY ® Awards. He won a record-tying nine GRAMMYs for a single project for 1999s Supernatural (including Album of the Year and Record of the Year for Smooth). He has also received the Billboard Century Award (1996), was ushered into the Rock and Roll Hall of Fame (1998), and received the Billboard Latin Music Awards Lifetime Achievement honor (2009). Among many other honors, Carlos Santana has also been cited by Rolling Stone as #15 on their list of the 100 Greatest Guitarists of All Time. Celebrating the chart debut of Guitar Heaven (Arista) in 2010, Santana joined the ranks of the Rolling Stones as the only musical act in chart history to score at least one Top 10 album in every decade beginning with the 1960s. He is also currently headlining at a multi-year residency at House of Blues at Mandalay Bay Resort in Las Vegas. In 2013, Carlos Santana was the recipient of the 2013 Kennedy Center Honors Award. Santanas new album CORAZÓN (RCA/Sony Latin Iberia) due out May 6, 2014 is a collaborative effort with the biggest names in Latin music.

Santana has been around since 1969 and shows zero signs of slowing down. His guitar work is something of magic. This concert includes 23 of their greatest hits from then to now and also a bunch of fantastic covers. The show is over three hours and it was filmed during Switzerland’s Montreux Jazz Festival. If all this isn’t enough the concert also features some great special guests including Susan Tedeschi, Derek Trucks and Cindy Blackman-Santana.

Obviously, every track is notable but these are some of my favorites. Two of my favorite tracks from Santana are “Black Magic Woman / Gypsy Queen” and “Oye Como Va”. “Europa (Earth’s Cry Heaven’s Smile)” is also so amazing! “Soul Sacrifice” is very notable including drum solo from Dennis Chambers. Lastly there is a really sharp cover of AC/DC’s “Back In Black”.

The Blu-ray presentation is very impressive. It was filmed in high-definition, so the video looks great and includes a great DTS-HD Master Audio track. With a concert Blu-ray, the release is based surely upon amazing sound. This one definitely kick-ass in the sound department. If a three plus hour was not enough, there are some great special features including various interviews with the band and a really cool behind the scenes look at the show. Very impressive release overall.