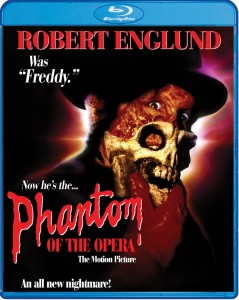 There is definitely no shortage of theatrical version of “The Phantom the Opera” but this 1989 adaptation starred Freddy Krueger himself, Robert Englund. This Gothic horror tale is a cool play on this story and features some great make up by Kevin Yagher (A Nightmare on Elm Street 2: Freddy’s Revenge, Face/Off). The film also star Bill Nighy (“Pirates of the Caribbean” series, “Underworld” series), Alex Hyde-White (“Indiana Jones and the Last Crusade”), Terence Harvey (“From Hell”) and Molly Shannon (“SNL”), directed by Dwight H. Little (“Halloween 4: The Return of Michael Myers”. Besides the terrible tagline on the cover, this is a highlight for any horror fan.

Official Premise: An aspiring opera singer finds herself transported back to Victorian-era London – and into the arms of a reclusive, disfigured maestro determined to make her a star. The silver-throated Christine (Jill Schoelen, The Stepfather) enjoys success through the arrangements of her new lover (Englund)… until she realizes that he has been committing unspeakably grisly murders in her honor and won’t stop until he’s completed his masterpiece… in blood!

The 1080p transfer is solid on this release. It works for the black and red color use in the film and there is no shortage of red 😉 The same goes for DTS-HD Master Audio track which sounds great with the music. The special features include “Behind The Mask: The Making of The Phantom Of The Opera”, which includes all-new interviews with Director Dwight H. Little, actors Robert Englund, Jill Schoelen, and Alex Hyde-White, Screenwriter Duke Sandefur, Special Make-Up Designer Kevin Yagher, Special Make-Up Effects Artists John Carl Buechler, Everett Burrell and John Vulich, and Composer Misha Segal. There is also an audio commentary with Director Dwight H. Little and actor Robert Englund and a original theatrical trailer included.