“We decided to play a little rock and roll this evening.  Are you up for that, Connecticut?”

And, with that, the Doobie Brothers delivered as promised: nearly two non-stop hours worth of straightforward rock classics with instantly recognizable riffs that have been the band’s calling card for over 40 years. The focus of the 18-song show consistently stayed on the band’s most prolific era of the 70’s when they churned out anthems such as “Long Train Runnin’”, “Rockin’ Down the Highway”, “China Grove”, “Jesus is Just Alright and “Take Me in Your Arms”, all of which feature the founding vocal/guitar duo of Tommy Johnston and Patrick Simmons – both of whom are still part of the group’s current eight-member line-up.

The mellower Michael McDonald era of the late 70’s and early 80’s was only represented by the inclusion of an extended version of “Takin’ It to the Streets” that featured an impressive keyboard intro from Guy Allison, vocals from Simmons and bassist John Cowan, and a rippin’ sax solo from Marc Russo. It was a wise choice for the set list not only because of the song’s popularity as a hit, but because its inherent funky groove matches the Johnston-era classics that dominate the current touring band’s repertoire. They pull off the tune flawlessly live – so well, in fact, that the concert version almost outshines the McDonald original.

As far as newer material is concerned…well…the Doobies don’t really have much of it. The group has only released one studio album over the past decade: 2010’s reunion with longtime producer Ted Templeman, “World Gone Crazy.” While that album is fairly tepid in comparison to the band’s multi-platinum mega-sellers from the 70’s, the two songs performed from it at this show – the title track and “A Brighter Day” – work quite well when played live and are a good addition to the band’s set list of classics.

With all of the driving guitar rhythm provided by the band’s four axemen and the percussive power of dual drummers Tony Pia and Ed Toth, it’s easy to forget that one of the key ingredients to Doobies music is intricate vocal harmonies that flesh out the songs and provide them with the richness that makes them worth savoring. To that end, the show’s overall sound was impeccably mixed, something that was especially evident when all four of the band’s frontsmen, Johnston, Simmons, Cowan, and endlessly-versatile instrumentalist John McFee, delivered the four-part a cappella harmony outro to “Black Water.” As much as it is truly amazing that these guys can still belt it out as clearly as they did when they recorded the song in 1974, it’s equally impressive that the 2013 tour’s audio crew was able to make every aural nuance sound as clear as possible within the context of a live show.

The music of the Doobie Brothers, when at its best, manages to effectively blend elements of rock and roll, country, bluegrass, soul, funk, and blues to produce songs that never pidgeon-hole themselves into an era and subsequently become dated. At their core is an element that is truly timeless: they’re fun. Given the band’s sheer exuberance while onstage, it’s clear that the Doobie Brothers themselves are still having a blast touring and energetically jamming out to these classics. As they proved to the Connecticut crowd, you don’t necessarily need fireworks to kick off a 4th of July holiday party. All you have to do is listen to the music. All the time.

[NOTE: Big thanks go out to the guy who first introduced me to the Doobies – and music in general – my father, Tom Picton, for his invaluable assistance with this article. ] 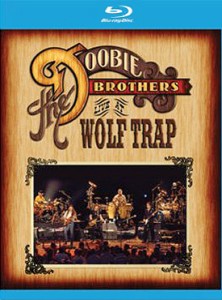 From the opening motorcycle revving to the closing bows, “The Doobie Brothers: Live at Wolf Trap” makes a solid two-hour case for why the Doobies stand shoulder-to-shoulder with the greatest bands of the classic rock era. The two-hour show is packed with iconic hits that never seem dated: “Long Train’ Runnin’”, “Take Me In Your Arms”, “Jesus is Just Alright”, “Black Water” – the list goes on and on. Filmed in 2004 at Virginia’s Wolf Trap National Park for the Performing Arts, the band immediately launches into a groove that combines elements of rock, country, bluegrass, blues in a way that is always appealing and flat-out fun. And, as the closing credits roll, one question is clear: Why aren’t the Doobie Brothers in the Rock and Roll Hall of Fame?  They’re looooong overdue.

The 2004 Tommy Johnston-led line-up draws almost exclusively from the band’s LPs from the 70’s that featured Johnston on lead vocals and guitar. Songs from the considerably mellower Michael McDonald era of the 1980’s are almost entirely absent – a respectable move given that McDonald’s “ya mo’ be there” vocal is such an inseparable earworm trademark. The sole McDonald track performed at the Wolf Trap – “Takin’ It to the Streets” – is handled vocally by founding Doobie, Pat Simmons, and the Brothers’ touring bassist, Skylark. The result is a live version that is equally as good if not better than the original version. It also provides the energetic bassist some center stage time that he so richly deserves. In fact, if there’s an intoxicatingly awesome performance to watch on this disc, it’s his.

Despite the fact that the concert is from almost a decade ago and has been available on DVD for  nearly as long, it truly shines on this first-ever Blu-ray issue given that the show was filmed using 10 high-definition cameras. While the overall program does suffer some from rapid-fire editing, the picture is always crisp and clean and the colors are perfectly balanced. The disc defaults to a LPCM stereo audio track that often buries the lead vocals so much that they’re almost inaudible in various spots. Switching over to the vastly superior DTS Master HD mix provides a much more even mix that utilizes the surround channels very effectively.

The disc also suffers from other technical issues that should have been corrected before this disc made it to market. The biggest problem is the extreme difference in sound levels between the live concert itself and the bonus features that are included, which include “backstage pass interviews” (which is more-or-less a sampler from the “Listen to the Music” documentary released late last year) and interactive links that appear during the concert that allow the viewer to jump into interview segments that directly pertain to the song being performed. While this audio glitch isn’t a big deal for the former, it’s hugely frustrating to have to crank up the volume to hear what Johnston and Simmons are saying and then, as a result, return to the concert footage now at deafeningly-loud sound levels. Some simple equalization and basic mixing would have gone a long way. It’s also somewhat annoying that the distracting talking head icons that appear at the bottom left corner of the screen to indicate the availability of the in-concert interview clips can’t be turned off completely.

Technical issues aside (they’re the only reason I’m docking this one by a full star), this is an amazing disc that showcases a legendary band in peak form. Now 40+ years on down the track, the Doobie Brothers’ long train is still runnin’ as strong and as powerful as ever.