Media Mikes is proud to offer two of our readers the opportunity to win a copy of the new film “Broken Roads” on DVD. The film, recently reviewed HERE, stars Academy Award nominee Sally Kirkland and was written and directed by Justin Chambers, who has autographed the DVD cover. All you have to do is tell us which “small” film really impressed you when you saw it? Was it the Coen Brothers’ “Blood Simple?” P.T. Anderson’s “Hard Eight?” What movie made you sit up and take notice of a new and exciting filmmaker?

At the end of the giveaway (2) random entries will be selected and the winners notified by email. This contest runs until Friday, March 15, 2013. Good luck! 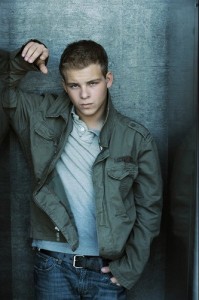 At age seven, Jonathan Lipnicki was a bona fide star. As Ray Boyd, the precocious son of the title character’s love interest in “Jerry Maguire,” he stole more hearts from the audience then star Tom Cruise. Regular television roles on such series as “The Jeff Foxworthy Show” and “Meego” kept him in front of the camera, as did roles in films like “Stuart Little” and “The Little Vampire.” Though he’s still busy in front of the camera, Lipnicki has embarked on a new career, adding the title of Producer to his resume with the release of the film “Broken Roads.” While promoting the films upcoming NYC appearance Lipnicki spoke to Media Mikes about his new career and dealing with fame at such a young age.

Mike Smith: At age 22 you began a new career as a producer. How did this come about?
Jonathan Lipnicki: I always knew I would end up doing something behind the camera, but I didn’t know it would happen at this point in my career.

MS: How did you become involved with “Broken Roads?”
JL: I like to say I fell into it. I met the director, Justin Chambers, through a mutual friend, and we hit it off. He has this crazy charisma, which makes you want to be friends with him and support him. One day he asked me if I knew any actors who I thought would fit the roles he sent out breakdowns for. I sent him a few actors that I knew and he liked my choices. Not long after that he asked me if I wanted to get involved.

MS: You continue to act. Is this something you’re going to continue to pursue or do you see your career moving to more behind the scenes?
JL: Acting is my number one priority, but I would like to produce more in the future.

MS: You were a star at age 7 when “Jerry Maguire” was released. Does fame look different at that age as opposed to now when you can appreciate it more?
JL: Your perception changes about certain things like fame when you grow older, it definitely loses some of its innocence. That being said I look different so I live in anonymity, which is amazing.

MS: What do you have coming up next, either in front of or behind the camera?
JL: I currently have a web series from the Russo Brothers (“Arrested Development”) on YouTube, and I have two films in post production, “Edge of Salvation” and “TAG”. 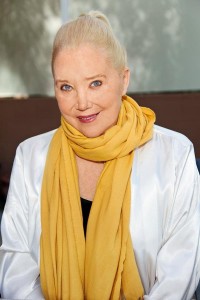 With a career that began in 1960, Sally Kirkland has built an incredible resume’ of roles on both television and in film. After small roles on episodic television and the occasional film, she hit it big in 1973 by appearing in two of the year’s biggest hits, “The Way We Were” and the winner of the Academy Award for Best Picture, “The Sting.” While continuing to appear on some of the more popular television series of the decade (“Baretta,” “The Rookies,” “Kojack” among others) she continued on the big screen with roles in “Blazing Saddles,” “Bite the Bullet,” “A Star Is Born” (which was just released on Blu-ray) and “Private Benjamin.” In 1987 she won a Golden Globe and earned an Academy Award nomination for her role as a former Czech-star trying to make it in New York City in the film, “Anna.” She continues to work steadily, with notable roles in films like “The Best of the Best,” “JFK” and “Richard III.” She currently stars in Justin Chambers’ new drama “Broken Roads.” Ms. Kirkland recently sat down with Media Mikes to talk about her new film, what she has coming up next and what it’s like to be an Oscar nominee.

Mike Smith: Tell us about Mrs. Wallace, your character in “Broken Roads.”
Sally Kirkland: She is a strong, proud, and lonely survivor who when we find her has been lost since her husbands death. She never had a good relationship with her daughter. And when her grandson shows up at her door step angry over his mothers death she has an extraordinary opportunity to experience love again.

MS: What attracted you to the role?
SK: Because I’ve never been a physical mother or grandmother and it was an opportunity to experience that with her. I feel she is amazingly dramatic and funny, the best kind of role. Her vulnerability is breath taking. I love roles where I get to open peoples hearts. I was motivated by (writer/director) Justin Chambers passion and vision…as well as Aiden Bristow’s. (Ms. Kirkland’s co-star in the film).

MS: You’re also credited in “Broken Roads” as an associate producer. How did that come about?
SK: In this particular case it allowed me to bring in writers to help with the script and to have casting consultation and bring in music composers. It also gave me creative consultation in the look of the marketing and posters, etc.

MS: One of my favorite clips on Youtube is the Academy Awards ceremony when you were nominated for “Anna.” While most nominees, then and now, appear calm you were anything but. What was going through your mind in the few moments after you hear: “And the winner is……?”
SK: I think in my own mind. I thought I was going to win, and I’ve never been good at covering up my feelings or knowing how to lie. It was a huge humbling experience. Check out the video below to watch Ms. Kirkland at the Oscars.

MS: You’ve built an incredible body of work over six decades. How have you managed to sustain such a long and successful career?
SK: I’ve been very blessed to have worked with some of the greatest actors and directors in the world. Starting with “The Sting” and “The Way We Were” (directed, respectively, by George Roy Hill and Sydney Pollack and both starring, coincidentally, Robert Redford). They let me know there was no where to go but up. I’ve been passionate about acting since I was ten years old. Never was too interested in going to college or having a family. My whole life is my art and God. I experience the flow of God when I’m doing my best acting.

MS: What do you have coming up next?
SK: A film called, “Alice Stands Up”, written and directed by Brent Roske, who directed me in a short called “African Chelsea.” He’s written this film for me, which is extraordinary. We should begin shooting by spring. 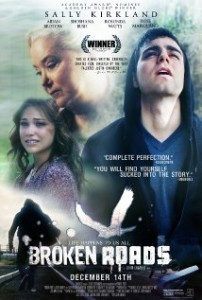 I’m sure I’ve said this before, but it bears repeating. One of the pleasures of this job is getting the chance to take a look at some of the first work a filmmaker does, especially when it’s done well. This week it was my pleasure to watch the first feature from writer/director Justin Chambers, a drama called “Broken Roads,” which is opening in New York City on February 19.

Aldo Russo (Bristow) is a happy kid of 17. But when he and his mother are involved in an auto accident that takes her life he finds his world turned upside down. As he is not yet 18 he is sent away to the country to live with his maternal grandmother, Mrs. Wallace (Kirkland). As his mother left home at a young age and never returned Aldo has never met Mrs. Wallace. At first things are strained. Though they are technically family there is nothing but the memory of a dead woman to bond these two together. Aldo has to wonder how long the next nine months are going to seem.

An intimate drama, with only a few main characters, “Broken Roads” could easily have gone down the maudlin road that bigger budgeted and similar stories (the Jane Fonda/Lindsay Lohan stinker “Georgia Rules” comes to mind) have followed. But with a smart screenplay by director Chambers and a talented cast, led by former Oscar nominee Kirkland, the story maintains its credibility throughout.

As Aldo, Bristow (who bears a strong resemblance to a younger Joaquin Phoenix) does a fine job dealing with the various emotions he’s called on to express. Anger. Fear. Loss. And, eventually, love. It’s a strong performance from an up and coming actor. Kirkland, who has somehow always managed to remain under the radar, is equally impressive as she deals with the same emotions Aldo is experiencing. Supporting work by Bush, as a young girl Aldo meet, along with Rolanda Watts as a kindly neighbor and Ross Marquand as someone from Aldo’s past, helps carry the film along. And special mention needs to go to cinematographer Michael Moghaddam for his camera capturing the beauty of the countryside as well as composer Jimmy Gelhaar, whose score is an excellent accompaniment to the on screen story.