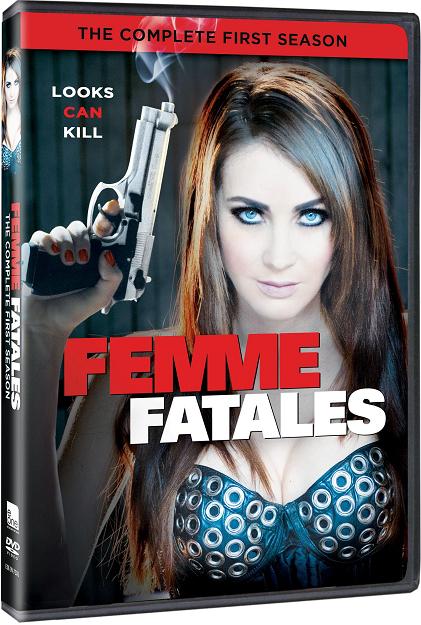 With the DVD release of “Femme Fatales: The Complete First Season” , Media Mikes would like to giveaway the following great prizes to our fans: An original script, signed by producer Mark A. Altman (“Castle”, “Necessary Roughness”) and some of the series stunning stars, “Femme Fatales” DVD sets, rare “Femme Fatales” Trading Cards and collectible mini-posters, courtesy of Entertainment One. If you would like to win this great prize, please leave us a comment below or send us an email and let us know your favorite Femme Fatale in TV or film? This giveaway will be open until February 15th. One entry per person, per household. All other entries will be considered invalid. Once the giveaway ends, Media Mikes will randomly pick out winners and alert the winners via email.

Looks can kill in season one of FEMME FATALES, the hit Cinemax® anthology series about powerful, sexy and dangerous women inspired by and styled in the tradition of pulp stories, film noir and graphic novels. This January, SEASON ONE finally arrives on DVD along with over two hours of never-before-seen bonus materials, courtesy of Entertainment One.

The half-hour program from creators Mark A. Altman (Castle, Necessary Roughness) and Steve Kriozere (NCIS, Castle) features stories inspired by such noir classics as Double Indemnity and Pulp Fiction and classic thriller TV series like The Twilight Zone. In each stand-alone episode, women find extraordinary ways of coping with their problems, channeling their survival instincts and bringing out their inner guile. Every episode is introduced by a mysterious and enigmatic host Lilith, played by Tanit Phoenix (Death Race 2, Lost Boys 3), and features different casts and storylines, some of which are intertwined as part of the series overall mythology.

Episodes include Behind Locked Doors (Part 1&2) in which Hollywood starlet Lacey Rivers (Kit Wileese) finds herself in the big house and is forced to use her acting skills to survive; a gorgeous, hard-working nurse discovers her inner strength during a hostage situation in Bad Medicine; Til Death Do Us Part, finds Rachel (Jordan Madley) waking up to a dead male stripper six hours before her wedding and Speed Date, which crosses After Hours and La Femme Nikita in an entertaining mashup featuring Isaiah Mustafa (The Old Spice Guy, Horrible Bosses) and Reggie Hayes (TVs Girlfriends). Other stars stopping in after hours include legendary Oscar-nominated director Paul Mazursky, Adam Goldberg (Saving Private Ryan, Entourage), Richard Kind (Argo, Curb Your Enthusiasm), Robert Lasardo (Nip/Tuck, Death Race), Charlie OConnell (Crossing Jordan), Dean Haglund (The X-Files, The Lone Gunmen) and many more!