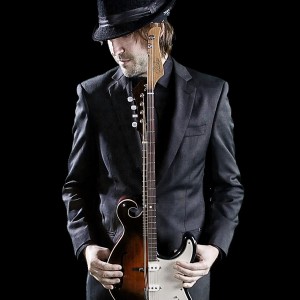 Andy Wood has been performing music since a very young age starting out with his grandfather and cousin. Wood spent most of this past year touring with Scott Stapp serving as the bands musical director during the Creed front mans successful solo run. Wood has also appeared on variety of album as a session player and recently released his second solo album titled “Caught Between the Truth and a Lie”. Media Mikes had the pleasure of speaking with Andy recently about the new double album release and his first memories of music.

Adam Lawton: Can you give us some background on how you got your start in music?
Andy Wood: I grew up playing bluegrass with my grandfather and cousin. We started right around the time I was about 5 years old. I was playing mandolin and my cousin was playing fiddle. As I got older I kept playing music and started getting hired to perform and different places. Once I discovered electric guitar it was all downhill. (Laughs) I started session playing and really working doing various hired gun gigs. I did work with people like Sebastian Bach and list of others. If there was an opening I would jump in there and help out. On the side I was still doing my own music which helped me stay sane. After you work on other people’s material you need an outlet for your own creativity.

AL: You recently worked with Creed front man Scott Stapp can you tell us how that came about?
AW: I was hired while Scott’s solo album was in the mixing process. Tim Pierce played on the album but I was brought on to be the bands musical leader. It’s been a great time being out on the road. I am kind of the go to guy when it comes to the musical arrangement and such. I have to sort of manhandle the decisions when it comes to recreating the album live. If Scott wants to rework a song or something like that I put it all together and bring it to the band. I also will fill in on keyboards or other instruments if needed.

AL: Can you tell us about your new double disc solo album?
AW: The album came from self reflection. I am not just a guitar player or just a mandolin player. I wanted to put together an album that still featured those things but not be jarring to the listener. I put together songs like “The White Tree” which is on the acoustic half of the release and songs like “The Four Horseman” which is on the electric side. The release runs the gambit of Celtic/bluegrass to full on heavy metal. When you look at those two genres there’s not a lot of cohesiveness so I wanted the songs to have a nice transition. The first disc starts out with acoustic tracks and leads in to some more rock type tracks. The second disc starts out with more ballad type rock songs before it really takes off with the heaviest parts of the album. It does slow back down a little with some country type songs which help transition back to the first disc. I wanted the release to make sense no matter which disc the listener started with.

AL: So the idea of doing a double album was something you had always wanted to do?
AW: Absolutely! I wanted to tell the world I more than just what I am normally associated with. I am not just an electric guy or a bluegrass guy. There is a side of me that writes music which is very relaxed and low key. I needed an outlet to where it was ok to show who I am and all the different sides of my musical personality while not alienating my fan base.

AL: With your wide variety of styles was it hard to narrow it down to which ones you wanted to showcase on the new records?
AW: There were some difficult parts but, I went in to the sessions with about 50 fresh ideas. I went in really overloaded with material. To help narrow things down a bit I put a checklist together which the songs would have to match the specific criteria I laid out. There had to be a lot of melodic content because that it’s self is huge. The songs needed that memorable melody rather than something that was just full of guitars licks and flash.

AL: Being a multi-instrumentalist which do you find more comfortable to write on?
AW: I think where ever I am at be it guitar, mandolin, sousaphone or whatever the instrument acts as the translator. I try to be a musician first over anything else and I want to make sure that the melody I come up with will work well no matter what it’s played on. When I am writing the instrument is just an outlet.

AL: Have you thought about putting together a tour to support the release?
AW: With it being towards the end of the year not a whole lot of touring happens throughout the holidays. Once the New Year kicks off in January I will be appearing at Winter NAMM in Anaheim, CA. In February I will be out on the Ship Rocked Cruise which is always a lot of fun. I think we have done four of those so far. The fans that go on those cruises are just so excited for every show. It’s a really great time.

AL: What other plans do you have for the coming year?
AW: I think those phone calls will start to come as the year roles on. A lot of times everyone is so tired from the previous year that they take a few months off to relax and then start back up working again. 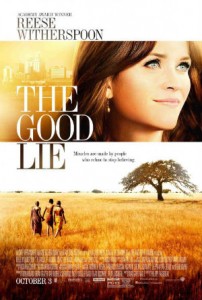 In a movie like this, the number one question to ask yourself is, “How much does this movie care about the people it’s portraying?” It’s a very legitimate question that has plenty of factors. The director of “The Good Lie” has a soft visual touch to the difficult issue of the second Sudanese civil war. Writer Margaret Nagle has handled the lives of others in her works, near and dear to her heart, so she doesn’t harm their image. And most importantly, some of the actors and actresses have lived through this kind of experience. So why can’t this movie outgrow its ABC Family TV movie feeling?

Mamere (Oceng), Jeremiah (Duany), Paul (Jal) and Abital (Kuoth Wiel) are happily headed to America after spending years in a Kenyan refugee camp. 13 years prior to that, they had to flee their Sudanese village after it was torched to the ground and their parents were slaughtered in front of them. In their nearly 500 mile trek to safety, they lose friends to starvation, watch other refugees get gunned down and Mamere watches soldiers take his older brother Theo. Mamere has to persevere and become the leader of hope for the group.

The first half hour is a bit harrowing since it pulls no punches through unnerving scenes of lifeless bodies floating in the river and our group having to bury one of their friends in the unforgiving wasteland. Even after all those hardships and helping one another through it, they can’t live together in America. The three men learn that their sister Abital can’t go with them to Kansas City. She has to go to Boston because rules require separating the men and women. Then the tone of the movie does a complete 180 when the trio arrives in cowtown.

While it’s a necessity that we need some humorous culture shocks to add relief to the horrors we just watched, they really seem to heap it on in a slightly dehumanizing fashion that borders on making fun of our group. It’s a bit light hearted to see them react suspiciously to jello, but I would hope it’s not the filmmaker’s intention for us to laugh at them being uncomfortable in their living situations and moving their mattresses into the living room so they can spend their first night in a new country together. Then if that wasn’t enough, the product placement is very blatant and repugnant. Consider the context of one scene where one of them becomes carsick because they’ve never been in a vehicle and have airplane food swishing back and forth in their bowels. What’s the cure? McDonalds. I’ll just leave it at that.

Miraculously it stops itself short of being completely off putting by introducing Carrie (Witherspoon) who instead of giggling at their misfortunes, is there to help them find jobs and seems genuinely concerned about their predicament. She doesn’t get a lot of on-screen time even though the poster for this movie would tell you otherwise. The real emotional draw for this movie is the refugees, but it doesn’t know where to go with them. Mamere wants to be a doctor and is probably the most driven of all of them. Jeremiah even quits a job because he morally doesn’t agree with what his boss has him do. Paul for some reason takes the advice of people he doesn’t know or has any real connection to, and starts smoking pot. It’s almost as if someone didn’t feel confident enough with the men trying to find normalcy after escaping a war torn area theme powerful enough and began shoehorning in another angles and characters.

I commend the actors for portraying something that’s very near and dear to their heart with such honest passion. When they’re on screen spilling their heart out, “The Good Lie” succeeds and nearly redeems its poorer qualities. Despite my complaints, I find it somewhat miraculous that the final moments are still a powerful message about good will. “The Good Lie” is a crowd pleaser, albeit one that is far from knocking it’s touching story out of the park.

MediaMikes has teamed up with Warner Brothers to give (50) readers and a guest to attend the upcoming advance screening of the new film “The Good Lie.”

The screening will be held on Tuesday, September 30, at the Cinemark Palace on the Plaza in Kansas City, Missouri. “The Good Lie” is an uplifting story with a Kansas City connection. The film opens on Friday, October 3.

SYNOPSIS
A Sudanese refugee is taken in by a straight-talking American woman in their new home in the United States. After their village is destroyed and their parents killed by Northern militia, Sudanese orphans Theo, his siblings and other survivors make a difficult journey to a refugee camp in Kenya. Thirteen years later, the group get the chance to settle in the U.S. They are met in Kansas by Carrie Davis (Reese Witherspoon), who has been charged with finding them jobs. However, seeing how adrift they are in 20th-century America, Carrie endeavors to help them in rebuilding their shattered lives.