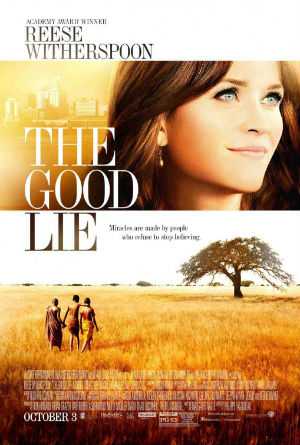 MediaMikes has teamed up with Warner Brothers to give (50) readers and a guest to attend the upcoming advance screening of the new film “The Good Lie.”

The screening will be held on Tuesday, September 30, at the Cinemark Palace on the Plaza in Kansas City, Missouri. “The Good Lie” is an uplifting story with a Kansas City connection. The film opens on Friday, October 3.

SYNOPSIS
A Sudanese refugee is taken in by a straight-talking American woman in their new home in the United States. After their village is destroyed and their parents killed by Northern militia, Sudanese orphans Theo, his siblings and other survivors make a difficult journey to a refugee camp in Kenya. Thirteen years later, the group get the chance to settle in the U.S. They are met in Kansas by Carrie Davis (Reese Witherspoon), who has been charged with finding them jobs. However, seeing how adrift they are in 20th-century America, Carrie endeavors to help them in rebuilding their shattered lives.