Masked Intruder return with the follow up release to their 2016 EP “Love and Other Crimes” simply titled “III” the album consists of 12 brand new tracks which were produced by Roger Lima (Less Than Jake) and Mike Kennerty (All American Rejects) at The Moat House in Gainesville, FL. “III” is the bands second release and first full-length album to be released via Pure Noise Records.

Intruder Red, Yellow, Blue and Green are back terrorizing your neighborhood with their latest album “III” but, have no fear Officer Bradford is in hot pursuit attempting to retrieve your valuables. Packed full of tongue and cheek lyrics and pogo ensuing punk rhythms “III” is an enjoyable listen from beginning to end. Tracks like “No Case” and “I’m Free (At Last)” are spewing over with energy and laughable subject matter while tracks like “All Of My Love” and “Stay With Me Tonight” cover more emotional topics set perfectly against the bands signature pop-punk style.

If you had a chance to catch the band on one of their many recent tours then you already know just how fun the band is live. “III” captures that same energy and enjoyment over the course of its twelve tracks giving you that same experience listen after listen. The only thing missing is a partially dressed Officer Bradford as the colorfully masked four piece have taken their musicality to another level with their latest offering.

NOW AVAILABLE FOR PRE-ORDER AT
WWW.MASKEDINTRUDERBAND.COM

UPCOMING U.S. TOUR WITH THE INTERRUPTERS
KICKS OFF FEBRUARY 27 TICKETS ON SALE NOW

Today, Masked Intruder have released a new song called “Please Come Back To Me”. Fans can listen to it now exclusively on AltPress.com. The song is taken from their upcoming new album III out March 1 through Pure Noise Records.

They previously released the first single and music video for “No Case”, which can be seen here: https://youtu.be/Ro72ES3e3Bo

For the new album, the band – Intruder Blue, Intruder Green, Intruder Red and Intruder Yellow – recruited lead producer/engineer Roger Lima (who also plays bass in Less Than Jake) as well as co-producer Mike Kennerty (who plays guitar in some band called The All-American Rejects) and recorded the album at Lima’s studio, The Moat House in Gainesville, Florida.

“Our songs aren’t just about the feelings and situations that they describe but they’re supposed to hopefully help other people think about and reflect about their own situations,” Intruder Blue summarizes.

The band’s most infectious album to date is now available for pre-order at www.maskedintruderband.com.

Masked Intruder kick off a nationwide tour with The Interrupters on February 27. Tickets are on sale now and a full list of cities they hit can be found below. 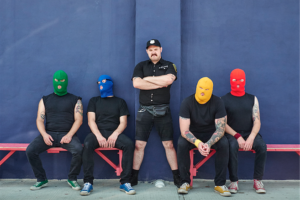 Enigmatic pop-punk misfits Masked Intruder have premiered a new video for “First Star Tonight” via Punktastic.com. The track is taken off latest EP Love and Other Crimes out via Pure Noise Records. The record is available for purchase at iTunes and at http://maskedintruder.merchnow.com/.

Masked Intruder will tour the UK with Me First and The Gimme Gimmes later this month. 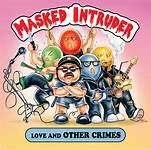 “Love and Other Crimes”
Masked Intruder
Pure Noise
Tracks: 6
Our Score: 4.5 out of 5 stars

Wisconsin based punk rockers Masked Intruder recently released a new EP titled “Love and Other Crimes”. The six track ep which is being released via Pure Noise is the follow up to the band’s 2012 self titled debut which was released via Red Scare and then re-released by Fat Wreck Chords in 2013.

Despite the band being somewhat mysterious due to their identities being hidden behind brightly colored ski masks one thing is certain, These guys know how to have fun! With six songs clocking in at just under fifteen minutes Masked Intruder’s “Love and Other Crimes” wastes no time getting to the point. Each song is brimming over with Ramones like rhythms and comedic lyrics which instantly make the release a fun listen each and every time. Tracks like the albums guitar fueled opener “Take What I Want” the super catchy “Beyond a Shadow of a Doubt” and the tongue and cheek filled “Running from the Cops” are all songs you can listen to time and time again. Even after multiple listens the songs still remain fun and fresh.

Don’t let the bands comedic look and nature fool you as each of the 4 members (Blue, Yellow, Green and Red) show tremendous disciple at their instruments making “Love and Other Crimes” a solid testament to that statement. If you’re a punk rock fan looking for something light and new grab yourself a copy of this release.

I remember purchasing this film on a bootleg VHS copy on eBay in the mid-90’s since I was a mega fan of the “Evil Dead” series”. If you are unaware this film is jam-packed with alumni from that franchise and even has Sam Raimi in an acting role. This release features an all-new 2K high-definition transfer of the original uncut, uncensored version. Along with the restored Blu-ray, this set also includes a DVD of the film. The transfer is definitely well done and features the original restored sound. This film is such a cult classic from the 80’s and even though it is not the best slasher to come out of that period it is definitely appreciated by its fans.

The plot for the film is limited but it classic for 80’s slasher horror. It focuses on a shopping mart is that is being stalked by an intruder and it’s employees are being picked off one by one. The kills and gore in the film are fantastic and should be especially since they are handled by the Academy Award®-winning KNB EFX Group. Danny Hicks definitely takes the award for best performance. He definitely nails the role of the crazy looney psycho. Besides appearances from Sam Raimi, fans of “Evil Dead” can also look out for Ted Raimi, Danny Hicks and of course a brief cameo from Bruce Campbell. Synapse Films is on roll with their amazing horror releases and have no disappointed yet. I can’t wait to what they are going to restore and release next.

The special features includes on this disc are fantastic (as always with Synapse). I really enjoyed the audio commentary with Scott Spiegel & Lawrence Bender. There is a great 30+ minute featurette called “Slashed Prices: The Making of Intruder”, which has great interviews and analysis from the cast and crew from the film…yes even Bruce Campbell. There are “Never-Before-Seen Extended ‘Murder’ Sequences”, which are also very interesting and come from the work print of the film. I really enjoyed the complied “Outtakes from NIGHT CREW Short Film” into a six minute clip with added music from director Scott Spiegel”. The “Cast Audition Tapes” are definitely a hoot and worth checking out. Lastly there is a “Behind-the-Scenes Still Gallery” and the “Original Theatrical Trailer”. Fantastic extras for a fantastic release.