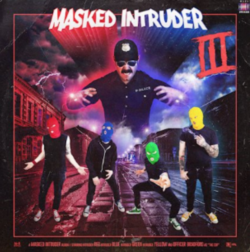 Masked Intruder return with the follow up release to their 2016 EP “Love and Other Crimes” simply titled “III” the album consists of 12 brand new tracks which were produced by Roger Lima (Less Than Jake) and Mike Kennerty (All American Rejects) at The Moat House in Gainesville, FL. “III” is the bands second release and first full-length album to be released via Pure Noise Records.

Intruder Red, Yellow, Blue and Green are back terrorizing your neighborhood with their latest album “III” but, have no fear Officer Bradford is in hot pursuit attempting to retrieve your valuables. Packed full of tongue and cheek lyrics and pogo ensuing punk rhythms “III” is an enjoyable listen from beginning to end. Tracks like “No Case” and “I’m Free (At Last)” are spewing over with energy and laughable subject matter while tracks like “All Of My Love” and “Stay With Me Tonight” cover more emotional topics set perfectly against the bands signature pop-punk style.

If you had a chance to catch the band on one of their many recent tours then you already know just how fun the band is live. “III” captures that same energy and enjoyment over the course of its twelve tracks giving you that same experience listen after listen. The only thing missing is a partially dressed Officer Bradford as the colorfully masked four piece have taken their musicality to another level with their latest offering.