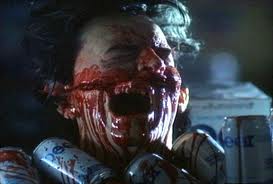 I remember purchasing this film on a bootleg VHS copy on eBay in the mid-90’s since I was a mega fan of the “Evil Dead” series”. If you are unaware this film is jam-packed with alumni from that franchise and even has Sam Raimi in an acting role. This release features an all-new 2K high-definition transfer of the original uncut, uncensored version. Along with the restored Blu-ray, this set also includes a DVD of the film. The transfer is definitely well done and features the original restored sound. This film is such a cult classic from the 80’s and even though it is not the best slasher to come out of that period it is definitely appreciated by its fans.

The plot for the film is limited but it classic for 80’s slasher horror. It focuses on a shopping mart is that is being stalked by an intruder and it’s employees are being picked off one by one. The kills and gore in the film are fantastic and should be especially since they are handled by the Academy Award®-winning KNB EFX Group. Danny Hicks definitely takes the award for best performance. He definitely nails the role of the crazy looney psycho. Besides appearances from Sam Raimi, fans of “Evil Dead” can also look out for Ted Raimi, Danny Hicks and of course a brief cameo from Bruce Campbell. Synapse Films is on roll with their amazing horror releases and have no disappointed yet. I can’t wait to what they are going to restore and release next.

The special features includes on this disc are fantastic (as always with Synapse). I really enjoyed the audio commentary with Scott Spiegel & Lawrence Bender. There is a great 30+ minute featurette called “Slashed Prices: The Making of Intruder”, which has great interviews and analysis from the cast and crew from the film…yes even Bruce Campbell. There are “Never-Before-Seen Extended ‘Murder’ Sequences”, which are also very interesting and come from the work print of the film. I really enjoyed the complied “Outtakes from NIGHT CREW Short Film” into a six minute clip with added music from director Scott Spiegel”. The “Cast Audition Tapes” are definitely a hoot and worth checking out. Lastly there is a “Behind-the-Scenes Still Gallery” and the “Original Theatrical Trailer”. Fantastic extras for a fantastic release.