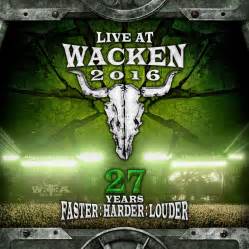 The ultimate heavy metal event-in-a-box is now available for fans to enjoy in the comfort of their very own home. “Live at Wacken 2016: 27 Years Faster: Harder: Louder” is a collection of some of the best performances from the 2016 Wacken Open Air festival held in Germany each yr. The double disc CD and DVD/BluRay features music from over 30 artists including Arch Enemy, Saxon and Bullet for My Valentine all packaged nicely in multi fold digipack.

No need for lengthy international travel or standing in a soggy bog along the European country side as “Live at Wacken 2016: 27 Years Faster: Harder: Louder” allows you to enjoy a majority of the Wacken Open Air festival from the safety and dryness of your own couch or recliner. Get comfortable as with a runtime of over four hours you are definitely in for a long haul especially if you plan to check it out from start to finish. If you want to skip around a little I highly recommend checking out the performances from Eluveitie, Bullet for My Valentine and Dio Disciples as they were easily my favorite. I also enjoyed the video version of this package a little more as it included in most cases a couple songs from each artist.

Invite a few friends over crack open some drinks and thrown on either the DVD/BluRay or the included audio versions of the release. Though a majority of the performances contained on the set are from European acts I wasn’t too familiar with there is still plenty of other material from bands I had heard before. Though I enjoyed seeing bands like Steel Panther and Saxon I think I had more fun checking out the bands who I hadn’t heard of because those performances were fresh and new to me. It’s always great to be exposed to new music and that’s certainly what “Live at Wacken 2016: 27 Years Faster: Harder: Louder” does. I do feel though that if you are a more casual metal fan there might not be enough familiarity included to warrant purchasing the cumbersome four disc set however, If you are a dedicated, die hard metal head that has yearned for the Wacken experience but couldn’t make the trip then this release is certainly for you as it gets you as close as you can be without actually being there. 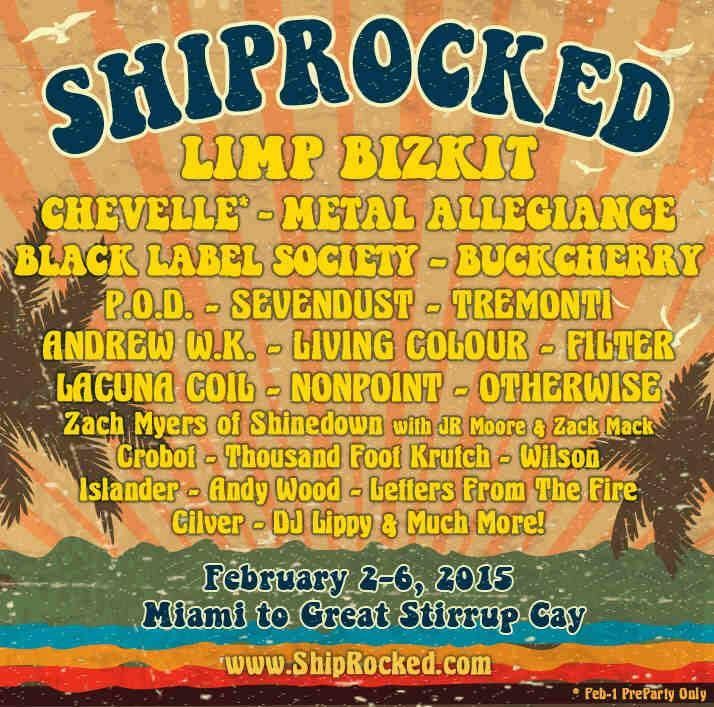 Take the lineup of a festival, put it on a cruise ship to the Bahamas, invite 2000 of your closest friends and you’ve got ShipRocked! This year was better than ever with an optional added day on the ship for the Superbowl Sail Away pre-party, but even with that addition, most survivors of this voyage at sea couldn’t get enough!

We boarded in Miami on February 1st, and while awaiting the kick off concert featuring Chevelle, we were all quite surprised when Zakk Wylde from Black Label Society came out on stage to play the national anthem. Chevelle then took us into game time with a high energy performance that got everyone in the mood to party. The Super Bowl was playing on screens all around the ship until halftime, when we were treated to a halftime show unlike no other, courtesy of the metal band Wilson, straight out of Detroit, Michigan. Complete with custom “jerseys”, sexy cheerleaders, screaming vocals and enough rhythm to make even your grandma shake her caboose, Wilson rocked the boat so hard that most ShipRockers forgot there was even an NFL championship on the line that night! The Sail Away pre-party concluded with Sevendust performing their self titled first album release, their first of three shows on this years sailing. Anyone that wanted a little more music then headed inside for some Three Years Hollow, or just meandered around, finding their friends, hitting the buffet, or getting some much needed rest. Remember, this was only the first night!

Day 2 was spent waiting for anyone that didn’t book the pre-party to get on the boat so that we could sail out for the Great Stirrup Cay, Norwegian’s private island. The first live performance of the day was at 4:30 PM, and we sailed away into the blue water with Limp Bizkit providing the soundtrack. From that point through midnight there were 4 different venues on board the ship with live music including Nonpoint, Andrew W.K., Tremonti, Gemini Syndrome, Filter, P.O.D (acoustic), Buckcherry, Lacuna Coil and some fresh faces with Cilver, Sidewise, and Letters From the Fire. The party did not stop when the shows were over, as post-midnight DJ Lippy Rage was spinning tunes to keep everyone up and moving all night long! Trust me, there’s nothing better than watching a bunch of rockers try and bust out the latest dance moves after a hard day of partying!

Days 3 and 4 were spent on the Great Stirrup Cay, where Norwegian Cruise Lines allows Shiprocked to set up a beach stage. Bands start live performances at 11:30 AM, with 2 bands performing on the beach per day, In addition, various contributors set up beach events like beach wars, rock my yoga, beach jenga, and even a boot camp challenge, all happening before and during the shows. 2 of the 5 meet and greet sessions took place on the beach as well. Get some sun, catch some tunes, go on an excursion, or simply catch a quick nap, because at 6 PM the activities on the boat started up again, with bands playing in the 4 “venues” on the ship.If you wanted a break from liver performances, you could have participated in rockstar karaoke, the drunk spelling bee, played some rock and roll bingo, or beer pong, hosted by our good friends in Crobot! Because each band plays twice while on the cruise, these two days covered Metal Allegiance, Crobot, Zach Myers, Otherwise, Daybreak Embrace, Black Label Society, Living Colour, Icon for Hire, along with some repeat performances from the bands we saw on days 1 and 2.

Day 5 was spent at sea as we made our way back to the port of Miami. Just because we’re on the boat all day does not mean that the fun stopped in any way! Belly Flop contests, meet and greets, charity auctions, book signings, and 12 shows to choose from on this, the final day of the cruise. The night ended with a screening of Rocky Horror Picture show and a walk through haunted house, then of course we had DJ Lippy Rage up all night partying until we pulled into port.

Keep in mind this whole adventure took place on the Norwegian Pearl complete with amazing food, a full service spa that offered specials, and an amazing staff that were rocking out with us the entire time! Centered around its fans, the creators of the ShipRocked event do a fantastic job accommodating band and event requests, truly listening to the feedback that comes from “survivors” of the ShipRocked experience. One line that stuck with me from this ShipRocked experience came from Alan Koenig, owner of ASK4 Entertainment and the producer of ShipRocked; “It’s like we build the house, but you guys make it a home.” Having spent the last week with my new extended “family” was truly an incredible experience, and I can’t wait to return “home” in 2016!

Don’t get left behind when the boat sets sail in 2016. Dates and ports of call are still being finalized but you can keep up with the latest information by “liking” the facebook page:

And if you have any questions just find me on Facebook. I’m a 2 year survivor!