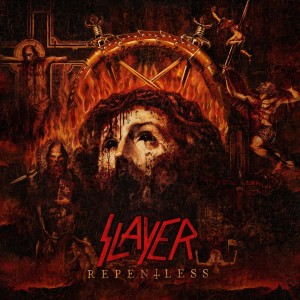 “Repentless” is the latest offering from thrash legends Slayer. The album which is being released via Nuclear Blast and features 12 take no prisoner tracks produced by Terry Date (Slipknot, Pantera). “Repentless” is the bands twelfth studio album and the first to feature Exodus guitarist Gary Holt who has been performing with the group since 2011 and Paul Bostaph who rejoined the group in 2013.

After an 8 year wait Slayer are back with their latest offering titled “Repentless”. Though the band looks a little different these days the groups sound is still just as brutal as ever. Tracks like “Repentless” and “Vices” blast through your senses like a hot knife through butter while songs like “When the Stillness Comes” and “Implode” will have your head banging and fist pumping whether it wants to or not. Though nothing can compete with the bands classic “Reign In Blood” era line up and sound the band which since 2011 has featured Exodus guitarist Gary Holt and more recently drummer Paul Bostaph the current lineup comes as close as possible.

Clocking in at just over 40 minutes what “Repentless” lacks in run time it makes up for in guitar riffage, machine gun like drumming and of course plenty of vocal wailing provided by vocalist/bassist Tom Araya. Long time Slayer fans may find some points of the album lacking intensity, however I found the slower paced moments quite fitting and enjoyable as they not only showed diversity in the groups sound. They also gave me a second or two to catch my breath in between the albums more speedy moments. The album is available in multiple formats including a Limited Edition version which includes special packaging and a bonus DVD with a making of the album documentary and a complete live performance from the bands 2014 Wacken Festival appearance.