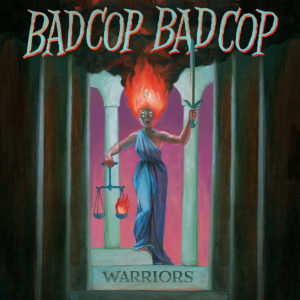 It’s been a hectic few years since Los Angeles punk quartet Bad Cop/Bad Cop dropped their debut full-length, “Not Sorry”. The band spent a huge chunk of their intervening time on the road like many bands do and in that time wound-up discovering some ugly things about themselves. Out of those experiences came a number of tracks which make up the band lasts release titled “Warriors”, the bands third album which features 11 new tracks which are once again being released via Fat Wreck Chords.

If the song titles and lyrics are just a glancing look at what was going on with Bad Cop/Bad Cop over the last few years it’s a miracle this album even happened at all. Thankfully things smoothed out with the four piece as the group’s latest offering “Warriors” is a gritty and searing album brimming over with pop-punk infused goodness making for a fun and enjoyable listen. Tracks like the albums opener “Retrograde” instantly had me moving with its sparkling guitar intro and catchy sing along chorus while songs like “Amputation”, “Wild Me” and the album’s title track “Warriors all hit with similar results.

Bad Cop/Bad Cop are living proof that good can come out of a bad situation and the group’s latest offering “Warriors” is a fitting testament to that statement. The band sounds better than ever and each of the albums 11 tracks has the potential to get stuck in your head for long periods of time. I found myself listening to the album multiple times and with each listen I was able to find something new to enjoy each and every.