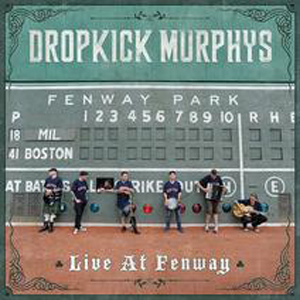 “Going Out In Style: Fenway Park Bonus Edition” is the latest release from the Irish tinged punk rock band Dropkick Murphys. The album is being released via the groups own Born and Bred Records and is a special repackaging of the groups 2011 studio release “Going Out in Style”. The 2 disc album features new cover art, the 2011 studio album and a complete live show which was recorded over two nights at Fenway Park in Boston, Mass.

Fans that may have picked up “Going Out In Style” when the album first was released last year may not find this album as appealing as I did. Disc 1 features the standard release of “Going Out in Style” which features 13 studio tracks and no additional content. Disc 2 is the live Fenway Park recording which features a variety of classic DKM tracks that were compiled from the bands 2 night performance at the historic baseball park. Songs such as “Tessie” and “The State of Massachusetts” were instant favorites as the live version of these songs seemed to have a bit more life than the studio takes. Midway through the show the band performs 3 acoustic tracks which I felt took away some of the overall energy. Personally I think it would have been nice to hear the electric version of “Boys on the Docks”. Though not a personal favorite of mine these acoustic performances were still stellar and packed full of traditional Celtic folk sounds.

Though both albums don’t feature any new material by the band “Going Out In Style: Fenway Park Bonus Edition” will be a great pick up for someone who attended the shows and or is a diehard Dropkick Murphy’s fan. The songs contained on these two discs should be more than enough to hold everyone over until the release of the bands new studio album.