Ruben Alvarez is the guitarist for the San Antonio, Texas based band Upon a Burning Body. The group recently released their 2nd full length album titled “Red. White. Green.” Via Sumerian Records and will once again be a part of this year’s Rock Star Energy Drink Mayhem Festival. Media Mikes spoke recently with Ruben about the album’s release and the bands plans for this summer’s tour run.

Adam Lawton: Can you give us a little background on the bands formation?
Ruben Alvarez: We had all been members of different bands here in the San Antonio area. Danny and Sal had wanted to start up a side project and they were the ones who started Upon a Burning Body. I jumped in a month or two later. Basically this side project took off way faster than any of our other bands. People really started liking us and were coming out to the shows so we realized we had something with this group.

AL: Can you tell us about the new album “Red. White. Green.”?
RA: When the band goes out on the road it becomes very hard to write so this time around we had our producer and a couple other songwriters working with us. We still brought a lot of songs to the table as a band but we chose a couple of their songs do go along with six of ours to help change the feel of the record. We wanted to keep our style while adding some diversity. I think it’s going to be our biggest record so far.

AL: how do you guys go about adding in that diversity while staying true to your original sound/style?
RA: I have always looked at song writing and you are telling a story through music. I feel that if we can write a good story and we can add in some chaos to that it will make for a fun listen. It definitely changes with each song. A lot really depends on what we want the song to be about. We like to listen to the songs and see what type of emotion it has and then go deeper from there.

AL: Do you ever feel limited or confined to write in the genre you are identified with?
RA: There is definitely a barter that goes on. We have to stay true to our sound because this is what we have always been and what our fans like. It’s always a scary moment for a band when you transition to a bigger sound because you don’t know how many fans you may lose or gain. You have to try and keep that familiar vibe. For us it’s all about the energy.

AL: What are you guys most looking forward to about being back on this year’s Mayhem Festival?
RA: The cool thing about this year’s tour is that we are going to be on a bigger stage. When we did the tour the first time we were on a small side stage. Last time out we were playing to around 3,000 people per shows and this time were going to be playing to around 15,000 people per show. This is a big step up for us.

AL: What is it that appealed to you about joining Mayhem Festival as opposed to going out on your own solo headlining tour?
RA: I think Mayhem is just such an awesome tour to be on. For me it’s the new “”OzzFest”. It’s a big metal tour for metal heads. I love metal heads because they are just so crazy and into the bands. I think if we toured on our own we would get sort of demolished as there are so many great tour packages out there. We had to be very precise with what we want to do as a band because of that.

AL: What are the bands plans after Mayhem Festival?
RA: Things are pretty crazy right now. Even before Mayhem starts we are going to be out on a short headliner run then we are going out with Emmure for some show in Canada before we take off for Download Festival. We get a couple weeks off and then we hit the road for Mayhem and go from there. 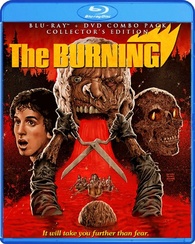 “The Burning” is probably either one of your favorite horror films or it is one of those that you have heard about but never seen.  The later was the case for me, I have known about this film forever and never saw it until it aired on a (long gone) TV station called “Monsters HD” years ago. The film is gory, cheesy and a must watch for any fan of horror. Be sure to keep an eye out for early roles from Fisher Stevens (“Hackers”), Jason Alexander (“Seinfeld”) and Holly Hunter (“The Piano”). The film wasn’t even given a proper DVD release until 2011. Thanks to Shout! Factory sister label, Scream Factory, we get this beautiful Blu-ray release that is going to leave hardcore horror fans very satisfied.

Official Premise: After a cruel joke goes awry, severely burning him and subjecting him to five years of intensive, unsuccessful skin graft treatments, Cropsy (Lou David) is back at camp…and ready to wreak havoc on those who scarred him! With his hedge clippers in hand, he terrorizes the camp and systematically mutilates each victim. Can a few courageous campers save themselves and destroy this demented madman before he kills them all?

This Collector’s Edition Blu-ray + DVD combo pack comes with reversible cover art.  You can either have Nathan Thomas Milliner’s amazing new artwork or if you prefer the original theatrical artwork you can just reverse the insert and BOOM! The 1080p transfer on the Blu-ray looks good for a film that is over 30 years old.  It is presented with an aspect ratio of 1.85: 1.  I was very impressed with this transfer, especially gives props to Tom Savini’s impressive special make-up and effects. The audio track included in a decent DTS-HD Master Audio Mono track.  It is not stunning but works for the film, especially scores with Rick Wakeman amazing score!

The special features are damn impressive as well.  Shout! Factory really delivers for the fans here.  There are two audio commentary tracks.  The first is with with Director Tony Maylam and International Film Journalist Alan Jones and the second is with stars Shelley Bruce and Bonnie Deroski.  Fans should enjoy both.  The first is more technical, while the second is more rehashing, but still fun.  “Blood ‘n’ Fire Memories” is a look into Tom Savini’s make-up effects. “Slash & Cut” is an interview with editor Jack Sholder. “Cropsy Speaks” is an interview with Lou David.  “Summer Camp Nightmare” is an interview with actress Leah Ayres. There is some retro Behind-the-Scenes Footage.  Lastly wrapping up the extras is the Theatrical Trailer and a Make-Up Effects/Poster Still Gallery.

There is something about German horror films that just really take it a step above the rest. This film was made in 1992 and released on VHS, remember that format?, in 1997. It is extremely disturbing and very gross but that is no shock if you are familiar with this gore-fest. The film has been banned for almost 20 years in Germany and it is very clear just from the DVD cover. The tagline really says it all “Uncut. Uncensored. Unconscionable.”  For horror fans this film equal a great return to the glorious days of VHS horror films.

Olaf Ittenbach, who also directed the film, stars himself as a low-life junkie who while babysitting his little sister tells her two terrifying bedtime stores. The first story is called “Julia’s Love”, which features an escaped serial killer who escapes from a mental hospital goes on a date to only massacre his date’s entire family. Then the second is called “The Purity”, where a priest goes on a rape and murder spree which leads him directly into the depth of hell. The last 15 minutes of the film are horrifying and not for the squeamish.

Intervision Picture Corp has been known for finding and releasing these horror gems to its fans. Fans of this film are going to want to pick it up just for the special feature. It is the first time that this rare 47 minute behind the scene making-of documentary has been released. Even though released on DVD, the film has a real VHS feel to it, which is what would be expected. Just get ready for the gore, besides this film is going to shock you for sure.