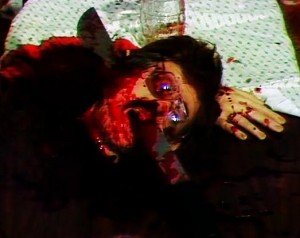 There is something about German horror films that just really take it a step above the rest. This film was made in 1992 and released on VHS, remember that format?, in 1997. It is extremely disturbing and very gross but that is no shock if you are familiar with this gore-fest. The film has been banned for almost 20 years in Germany and it is very clear just from the DVD cover. The tagline really says it all “Uncut. Uncensored. Unconscionable.”  For horror fans this film equal a great return to the glorious days of VHS horror films.

Olaf Ittenbach, who also directed the film, stars himself as a low-life junkie who while babysitting his little sister tells her two terrifying bedtime stores. The first story is called “Julia’s Love”, which features an escaped serial killer who escapes from a mental hospital goes on a date to only massacre his date’s entire family. Then the second is called “The Purity”, where a priest goes on a rape and murder spree which leads him directly into the depth of hell. The last 15 minutes of the film are horrifying and not for the squeamish.

Intervision Picture Corp has been known for finding and releasing these horror gems to its fans. Fans of this film are going to want to pick it up just for the special feature. It is the first time that this rare 47 minute behind the scene making-of documentary has been released. Even though released on DVD, the film has a real VHS feel to it, which is what would be expected. Just get ready for the gore, besides this film is going to shock you for sure.