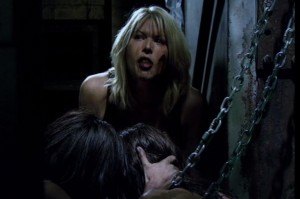 Right off the bat, the film drew me in due to its interesting box art.  When it comes to horror films unfortunately a good horror box art never means good movie…I am just a sucker.  This one definitely surprised me.  For one thing it definitely earned it unrated rating since it was very disturbing and very gross, but I guess that is why I enjoyed it.  The story is a little light but it overall it definitely keep me interested for the 90 minutes.

The film is about a crazy psychopath serial killer known as The Ghost, who has no limits, captures and tortures his victims, young girls, in his basement. After his latest kill, Police Detective Balasco and psychiatrist Dr. Metcalfe team up in order to find the killer and save the girls.  The team is in a race for time before it is too late to rescue these victims.

The best part of the film was easily Daniel Baldwin as a crazy psycho killer.  He nails the role of the lunatic who abducts, tortures and kills his preys.  Phase 4 Films are getting know for releases some pretty awesome titles in the last few months, so keep an eye out for there future releases.  In the special features category though, it is a little light.  There are a few deleted scenes, which are decent and only a trailer included.  Overall horror fans might want to check it out just for some good gore and one crazy Daniel Baldwin.