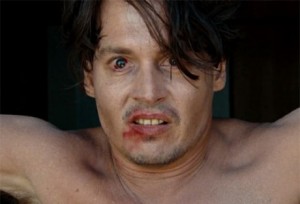 Johnny Depp + Hunter S. Thomspon novel = match made in heaven. After Depp’s performance in 98’s “Fear and Loathing in Las Vegas”, there has been talks about this novel being made into a feature. It has a LONG road and even though it finally was released, it misses a certain HST feel to the movie. You can’t compare this film at all to “Fear and Loathing”, they are unrelated and two different novels. Don’t get me wrong I enjoyed it thoroughly enjoy this one as well and Depp acting definitely delivers another great ode to HST. Depp even pulled director Bruce Robinson (Withnail and I) out of retirement, since 1992, to sharply direct this adaptation. Funny, suave and free-spirited, this film can be enjoyed if you just sit back and let the rum flow.

Johnny Depp plays Paul Kemp, a journalist working for a newspaper in San Juan, Puerto Rico. He arrives in PR in order to escape his past life in New York and hopes to be able to write the truth for The San Juan Star. During Kemp’s work and investigations he befriends co-worker, Bob Sala (Michael Rispoli) and both of them consistently get into a lot of trouble. Kemp next meets Hal Sanderson (Aaron Eckhart), who tries to get him involved in a corporate scheme to take over the island. Besides Kemp getting in too deep, he also becomes obsessed Sanderson’s girl Chenault (Amber Heard) and then things go all wrong for the journalist.

Sony’s Blu-ray presents the video in 1.85:1 aspect ratio with a 5.1 DTS-HD Master Audio track. The video is sharp and in some scenes really captures the beauty of Puerto Rico. The audio track also impressive especially during the music sequences in the film. There are only two special features and no commentary track but overall they are still good. “A Voice Made of Ink and Rage: Inside The Rum Diary” is a basic featurette about the film. It covers cast/crew interviews, costuming, location challenges, and on the spirit of Hunter S. Thompson on set. Lastly there is a VERY in-depth feature called “The Rum Diary Back-Story”, which runs about 45 minutes. It features interviews from Depp, HST himself and make others influences from the book. There is also a reading excerpt from the book and a looks into the writer’s career. It is a fantastic look into film’s path to the screen by Wayne Ewing.