Ruben Alvarez is the guitarist for the San Antonio, Texas based band Upon a Burning Body. The group recently released their 2nd full length album titled “Red. White. Green.” Via Sumerian Records and will once again be a part of this year’s Rock Star Energy Drink Mayhem Festival. Media Mikes spoke recently with Ruben about the album’s release and the bands plans for this summer’s tour run.

Adam Lawton: Can you give us a little background on the bands formation?
Ruben Alvarez: We had all been members of different bands here in the San Antonio area. Danny and Sal had wanted to start up a side project and they were the ones who started Upon a Burning Body. I jumped in a month or two later. Basically this side project took off way faster than any of our other bands. People really started liking us and were coming out to the shows so we realized we had something with this group.

AL: Can you tell us about the new album “Red. White. Green.”?
RA: When the band goes out on the road it becomes very hard to write so this time around we had our producer and a couple other songwriters working with us. We still brought a lot of songs to the table as a band but we chose a couple of their songs do go along with six of ours to help change the feel of the record. 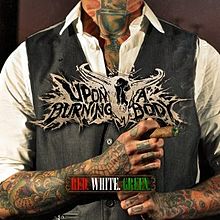 We wanted to keep our style while adding some diversity. I think it’s going to be our biggest record so far.

AL: how do you guys go about adding in that diversity while staying true to your original sound/style?
RA: I have always looked at song writing and you are telling a story through music. I feel that if we can write a good story and we can add in some chaos to that it will make for a fun listen. It definitely changes with each song. A lot really depends on what we want the song to be about. We like to listen to the songs and see what type of emotion it has and then go deeper from there.

AL: Do you ever feel limited or confined to write in the genre you are identified with?
RA: There is definitely a barter that goes on. We have to stay true to our sound because this is what we have always been and what our fans like. It’s always a scary moment for a band when you transition to a bigger sound because you don’t know how many fans you may lose or gain. You have to try and keep that familiar vibe. For us it’s all about the energy.

AL: What are you guys most looking forward to about being back on this year’s Mayhem Festival?
RA: The cool thing about this year’s tour is that we are going to be on a bigger stage. When we did the tour the first time we were on a small side stage. Last time out we were playing to around 3,000 people per shows and this time were going to be 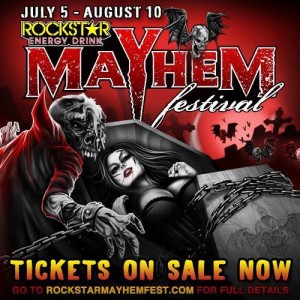 AL: What is it that appealed to you about joining Mayhem Festival as opposed to going out on your own solo headlining tour?
RA: I think Mayhem is just such an awesome tour to be on. For me it’s the new “”OzzFest”. It’s a big metal tour for metal heads. I love metal heads because they are just so crazy and into the bands. I think if we toured on our own we would get sort of demolished as there are so many great tour packages out there. We had to be very precise with what we want to do as a band because of that.

AL: What are the bands plans after Mayhem Festival?
RA: Things are pretty crazy right now. Even before Mayhem starts we are going to be out on a short headliner run then we are going out with Emmure for some show in Canada before we take off for Download Festival. We get a couple weeks off and then we hit the road for Mayhem and go from there.