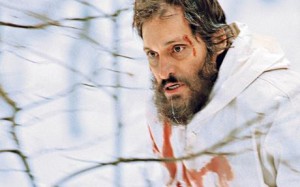 I have never been a giant fan of Vincent Gallo but he definitely deserves some respect for this role. “Essential Killing” is a subtle but powerful drama thriller and delivers some great suspense. The film runs a little long at only 85 minutes though. The film is beautifully shot and the locations are really spectacular. Overall the film itself it is deep and heavy though very interesting.

The story follows Mohammed, a Taliban fighter, who is captured by the US military in Afghanistan but during transport escapes. He spends the movie fending for himself in the wild trying to survive and has no regret for his actions. He is being tracked the whole time by men who are hot on his trail.

Gallo’s role in the film is of the Taliban fighter, is really intense and he who delivers a really tough performance with no dialogue. The film is mixed with elements of  seclusion and survival. The extras on the disc are virtually missing like most releases from Tribeca Film. There is only a brief interview with the director Jerzy Skolimowski.