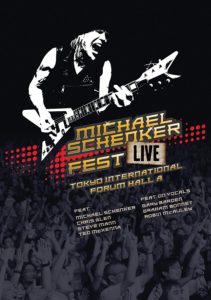 Michael Schenker, one of music’s greatest rock guitarists has just released a new live album titled “Michael Schenker Fest “Live” Tokyo”. Recorded at Tokyo’s International Forum on August 24, 2016 via inakustik this historic concert features guest appearances from some of the greatest rock vocalists who have worked with Schenker over the years including M.S.G.’S Gary Barden, Graham Bonnet, and Robin McAuley of the McAuley Schenker Group.

For Michael Schenker fans not fortunate enough to have been able to attend the “Michael Schenker Fest” last year in Tokyo, Japan the latest live offering from the prolific guitarist has you covered. Together with inakustik the listen is instantly catapulted front and center for a barrage of riff-tastic goodness courtesy of Schenker and, a bevy special guests from Michael various groups. Tracks like “Attack of the Mad Axeman” featuring Gary Barden, “This Is My Heart” featuring Robin McAuley and probably my favorite track off the release “Doctor Doctor” which features Gary Barden, Graham Bonner and Robin McAuley all side by side with Schenker and his band.

Though I found the albums overall mix to be a touch thin the performances on each of the albums 18 tracks more than made up for any audio short comings as each performance was quite enjoyable. I also liked that the release is available in a variety of formats (CD, DVD, Blu-Ray) allowing you to have two different experiences with the same release. Long time Schenker fans will certainly want to pick this up for their collection.